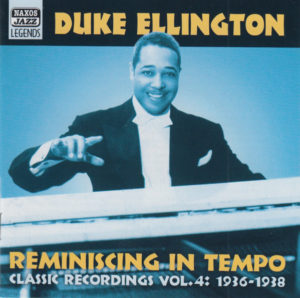 From the very outset with the stomping bass line and brassy trio, Merry Go Round sets the hot tempo for this 17-piece compilation of recordings made between 1932 and 1935.

Transferred with great skill by David Limnick, the reproduction of these 78s released on a variety of labels including Victor and Brunswick is an object lesson in re-mastering. The recordings were made during Ellington’s most productive period – now at the Cotton Club – with a band that combined 12 players. In the period he and his musicians had travelled across the USA and had visited Europe. Chart successes were the order of the day with Cocktails for Two reaching No 1 and others following it into the charts.

The white clientele who would enjoy Ellington’s music and performances would not think twice at supporting opposing the racial ban on black artists outside of certain venues, and it would only be a few years before the Nazi Party would hold its infamous exhibition, Entaerte Musik, in which jazz, black musicians and the saxophone would signify all that was wrong about Proscribed Music.

This second volume devoted to Ellington’s music also features a track called Dear Old Southland where the first few notes played by the trumpet could be a predecessor of the same phrase used as the title music for a well-known TV soap based in Manchester. I wonder if there is any link with Coronation Street. Fanciful thinking on my part I suspect! Anyway, this is a release to treasure not just for the life-enhancing playing but the historical legacy it reflects.