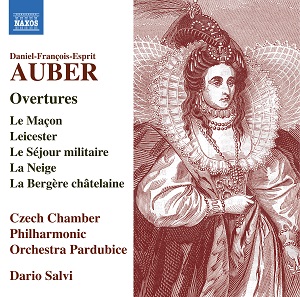 Daniel-François-Esprit Auber was one of the most well-liked and recognised figures in Paris in his time. Noted for his amiability, ready wit and generosity, his personality is often reflected in the verve and uplifting nature of much of his music.

This disc opens with the overture to the composer’s first great success Le Maçon, an opéra comique with a libretto by Eugéne Scribe on fairly popular post-revolutionary themes. An arresting opening indicates a measure of darkness to the drama to come, but soon gives way to some of the most hummable melodies in any overture of this period. Two further excerpts from the opera follow: the Act III Entr’acte and the Act II melodrama, both of which reveal a certain seriousness underlying the lighter touches in the overture.

Le Timide, ou Le Nouveau Séducteur, whilst being Auber’s least successful opera, still boasts an overture worthy of gracing any concert stage: it is a consistently light work, full of grace and elegance, so it is a real shame in hindsight that the piece had such a troubled ride.

The other overtures here are mostly from somewhat more successful works, each of which proved to be significant in the composer’s career. Especially attractive are the excerpts from La Neige, ou Le Nouvel Éginard, which features the customary upbeat music of the other works on the disc, but also boasts a truly attractive romantic melody along the way.

All of the works on this disc are scored for chamber orchestra and the Czech Chamber Philharmonic Orchestra, Pardubice offer an admirable rendering of this music under conductor Dario Salvi. Salvi’s emphasis is always on the expressive qualities of the music, resulting in clearly articulated interpretations of the faster passages whilst allowing for moments of real beauty to shine through in the romantic passages. My only quibble is that, being a chamber recording, the acoustics are sometimes a little dead, as if the recording room was a little small, but better an accurate rendering of the acoustical qualities than digitally added reverb.

Auber is a sadly neglected composer outside of his native France and more’s the pity, as the evidence on this recording is that we are missing out on a great deal of high quality opéra comique music from an engaging musical voice. Maestro Salvi not only conducts with great aplomb but has also produced as authentic a revival of the music as we can hope for: he worked from the composer’s original manuscript and personally restored and prepared it for performance. We must always be grateful to the likes of Salvi and Naxos for championing this illuminating collection of music from a much misunderstood musical genre. DA