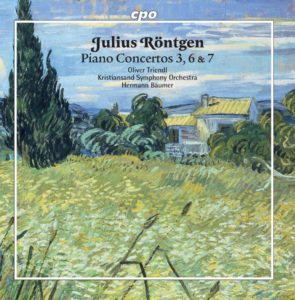 Julius Röntgen was, it might be fair to say, Dutch classical music’s great over-achiever. Born in Germany, the son of a Dutch violinist father and pianist mother, the composer was presented with a choice of travel to Vienna or Amsterdam. He opted, for better or worse, for Amsterdam, as he felt there were career opportunities as a teacher in his parents’ homeland. An able pianist himself, he was noted not only for performing his own works, but also gave a performance of Brahms’ second concerto in Amsterdam under the baton of the composer himself.

To call Röntgen a prolific composer would be an understatement. He wrote 7 piano concertos, 25 symphonies, 3 violin concertos, 3 cello concertos and an array of solo and chamber works. Röntgen composed compulsively and in enormous quantity, but the quality does vary and a general consensus among his critics is that he perhaps composed too much for his own good. A lifelong friend of Edvard Grieg, he also completed Grieg’s unfinished final string quartet.

Three concertos are on this disc, demonstrating the sheer variety in Röntgen’s work. Very much a romantic, he was also no stranger to innovation and the three works here are all in a markedly different character.

The third piano concerto dates from a difficult time for the composer. His friend, cellist Kees Scheffer died suddenly at the age of 31 and the composer was compelled to write, perhaps as a coping mechanism in this difficult time. It is a mostly optimistic work, composed with a sense of gratitude for his friend’s life rather than a mournful work. It is the only movement on this disc with 4 movements, of which the highlight is undoubtedly the second movement Allegretto con grazia, featuring a prominent cello line in memory of the composer’s friend alongside the piano solo. The composer, usually something of a keen self-publicist, seems to have only been lukewarm to this concerto and it might be fair to say it is the least successful work on this recording: a great many fine musical ideas, but a slightly overlong work with a final movement that fails to really capture the listener’s attention as well as the first achieves.

Far more successful are the other two featured works here. The 6th and 7th piano concertos were written almost simultaneously between 1929-30 and were premiered together. Since then, they are often coupled in programmes, due to their comparative brevity. The 6th is the most chromatic of these three concertos, opening with an ominously disjunct melody in unison strings, before the piano offers something by way of harmony. It is a single movement work and this opening idea recurs throughout, as if to indicate the transitions between the sub sections of the movement. Ultimately the work relaxes into a deep sense of lyricism with no shortage of technical challenges for the pianist. The 7th concerto is a sunny and glittering work with only a hint of melancholy in its second, slow movement. Both were performed on a very happy occasion for the composer: Sir Donald Tovey had surprised him with an honorary doctorate from the University of Edinburgh and the two late concertos were performed alongside Röntgen’s most recent symphony: The Edinburgh Symphony, the orchestral set for which was subsequently lost and has only recently been rediscovered.

The Norwegian Kristiansand Symphony Orchestra do a sterling job on this release, conducted by Herman Bäumer, each performance very sensitively balanced with the soloist and never overpowering even in the most exuberant music. The star of the show is undoubtedly Olivier Triendl, who produces a lightness of touch in the always lyrical music, which is perfectly judged to avoid bombast in music that could very easily fall into this trap. The performance of the 6th, for me is the most noteworthy, due to the enormous variety within the single work, giving soloist and orchestra a real chance to show their musicality throughout every aspect of the piece. DA