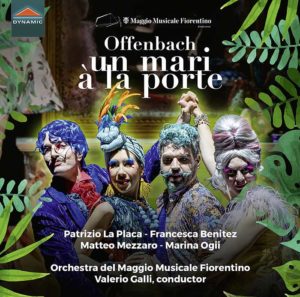 This one act operetta directly followed Orphée aux Enfers in Offenbach’s canon of stage works. A considerable success in Paris when it premiered in 1859, Un Mari a la Porte (A Husband at the Door) also became something of a hit elsewhere in Europe, but it was not until the 1950s when it received its UK premiere. This edition of the piece represents the first time that the whole work has been recorded on video and should be celebrated on that virtue quite apart from the musical and visual aspects of the production. The short work is a one act farce for four singers and no chorus concerning a down-on-his-luck operetta composer who, deeply in debt and careless in love, is fleeing both a jealous husband and bailiffs. He climbs down the chimney of the just-married Suzanne and hides in a cupboard, but it isn’t long before he is caught up in still more complications, all set around the one room.

Luca G. Logi prepared the orchestration for the present production, tailored to suit the particular performers. It is faithful to Offenbach throughout and I would perhaps benefit from a little more knowledge of the original score to see just how it has been adapted. Performance wise, the whole production is very pleasing: Francesca Benitez soars to virtuosic heights as Suzanne’s friend Rosita and baritone Patrizio La Placa has superb vocal dexterity as Suzanne’s eponymous husband at the door- both very well executed comic roles. Highlights here include Benitez’ interpretation of the Tyrolian waltz early on (there are a number of points in the production in which Benitez uses extremely high notes to great comic effect as shown here) and the role of Placa in the later quartet for all the characters. Tenor Matteo Mezzaro and Marina Ogii are

good choices for the composer and Suzanne respectively, though there were a couple of points at which I wondered if their particular voices were a little on the heavy side for a light opera.

Directors Luigi Di Gangi and Ugo Giacomazzi had clearly considered their production very carefully, noting parallels not only between operetta and Aristophanes (the bedroom resembles a birdcage in a coded reference to The Birds) but also between operetta and Italian comedy. Visually, the production is a lot of fun: highly colourful and energetic. That said, the production overall is a bit of a mixed bag: there is seldom, if ever, any real stillness on the stage, giving the whole production a kind of frenetic energy, which at times lacked the necessary elegance of French operetta. Again, there are reasons for this and the directors point out the regular bird-like motions of the on stage actors again linking the action to Aristophanes’ play. The times when the production really doesn’t work are when it is a little too “Italian” for its own good- that is to say Commedia dell’arte influenced featuring somewhat unsubtle and caricaturish aspects of the performance. There is even a film reference toward the end, which I daresay will be lost on all but the most familiar with Italian cinema.

Quibbles aside, however, this release is genuinely a lot of fun featuring a well thought through intelligent production, and generally fine singing. The Orchestra del Maggio Musicale Fiorentinom playing this arrangement of the score, sounds very fine indeed, though I remain curious as to the original scoring. Fans of operetta, do not hesitate to pick up this little box of delights! (available on CD, DVD and Blu-Ray). DA