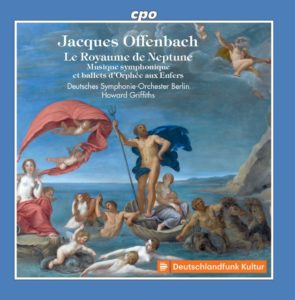 This new release represents a major new discovery. Offenbach premiered Orphée aux enfers in 1858 intending it as a relatively intimate piece designed for a smaller theatre than those associated with Grand Opera. Years later, however, in 1874, Offenbach was asked to revise the piece for a much more lavish production at the Théâtre de la Gaîté in Rue Papin. The length of the piece nearly doubled (from two acts to four) thanks to the inclusion of numerous extended ballet sequences.

This production broke all box office records at la Gaîté, but demand continued for even more lavish spectacle. Such a spectacle was, it transpires, included, but it was only discovered very recently by Jean-Christophe Keck, who found manuscripts in a loft. These were edited and published by Boosey and Hawkes and given a premiere in Vienna earlier this year, followed by this new recording. The newly discovered sequence is actually a score for a lavish water-ballet (I kid you not- a fully staged above and underwater extravaganza!), which would have added a full half hour to the score in no less than eleven movements. This ballet, as the title suggests, depicts the kingdom of Neptune, into which Euridyce descends meeting dancing lobsters, crabs and fishes, before Aphrodite awakes and the sequence culminates in the creation of a pearl. At the risk of editorialising it sounds like an extraordinary spectacle!

Musically, it is a gem of a suite, beginning on a note of high drama as the waters rise and apparently rather stormy waters they are as well, but eventually they calm revealing the magnificent submerged kingdom. Other highlights of the suite include a rather irreverent waltz and an extended passage depicting the creation of the pearl.

Also included are two existing and well known excerpts of ballet music from the opera: the Pastorale and the Divertissement and the disc is book-ended by two versions of the overture for Orpheus: the original written for the 1874 revision and the more famous and frequently played overture by Carl Binder who re-wrote it for the Vienna premiere.

The Deutsche Sinfonie-Orchester Berlin really shine on this recording under the baton of Howard Griffiths, though he does arguably take the Binder version of the overture far slower than many, resulting in a very precise and elegant interpretation, while it may not be exactly the party piece interpretation many of us know. The result is not only a major musical discovery but an absolutely delightful listening experience full of catchy and exuberant music, proving such recordings can be both academic and great fun! DA