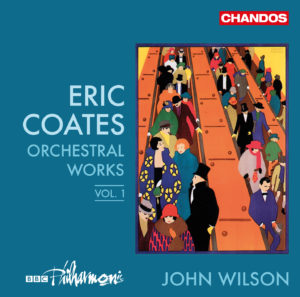 This is another John Wilson winner from the label based in my home town of Colchester.  Eric Francis Harrison Coates, composer, conductor and violist born Hucknall (Notts) in 1886, will need little introduction for most devotees of our kind of music.  The likes of By The Sleepy Lagoon, The Dam Busters March and Calling All Workers would be recognised throughout the land.

It has been reckoned that his greatest asset as a conductor was his orchestral experience as a viola player under Sir Thomas Beecham and Sir Henry Wood and working with such guest maestros as Elgar, German, Delius, Holst and Richard Strauss.

As a composer following in the light music traditions of Sir Arthur Sullivan and Edward German, Coates died at Chichester in 1957 causing the prominent writer on popular music, the late Peter Gammond, to opine that “After his death the great age of British light music seems to have lost its leader and its way.”

The selection here opens with Coates’ first success, from 1922, the miniature overture The Merrymakers, with its fanfare-like parts for my favourite French horns.  Next comes the longest work,‘The Jester At The Wedding Suite’ (24:39), a fairy story of the hopeless love of a jester for a princess imagined as a ballet, commissioned in 1932 for the Torquay Music Festival.

Three possibly less well-known works follow: Dancing Nights concert waltz, Ballad for String Orchestra and Two Symphonic Rhapsodies on Popular Songs.   Then there is the aforementioned signature tune of ‘Desert Island Discs’ and the familiar ‘London (London Everyday) Suite’; its third movement, Knightsbridge March, being chosen by BBC radio in 1933 as the signature tune for ‘In Town Tonight’, which became famous overnight and put Eric Coates on the musical map as no other composition had done.

The excellent Manchester-based BBC Phil, led by Yuri Torchinski, are very well conducted by John Wilson – using his own definitive editions of the scores – with his customary flair.  The quality of the sound recording (24-bit/96 kHz) made at MediaCityUK, Salford in January 2019 is as we have come to expect from this source.

Eric Coates was a composer who had a prolific talent for a good tune.  Described by his son as “happy throughout his life”, this album and the promise of more to come will undoubtedly give anyone wise enough to buy the CD or download a deal of happiness too.

In the aftermath of Eric Coates’ death in 1957, several commentators hailed the composer as ‘The Uncrowned King Of Light Music’ – and with good reason  !

Unlike his contemporary Light Music composers Haydn Wood and Montague Phillips, both of whom had aspirations to write ‘serious’ works as well, Coates never strayed far from his chosen path, i.e.  the composition of  immaculately  crafted and meticulously scored small-scale orchestral pieces – mainly marches, waltzes [generally referred-to as ‘valses’] and suites.

During his lifetime, and in the following years – indeed, right up to the present time – Coates was always held in the highest regard by music professionals and afficianados alike. His name has remained in the perception of the wider public, due in no small measure to the exposure that his music has continued to enjoy on both recordings and broadcasts. That he became very successful   in having a number of his works adopted by the BBC as theme tunes for radio and television must have assisted enormously in this regard, together with   the  march featured in the WW2 film  The Dam Busters.

Even during the relatively sparse days of the LP era, when there was a severe dearth of Light Music in record   companies’ catalogues, Coates was always present. With the advent of the CD, the position has, fortunately,  changed and there is now a wealth of  material available, not only of Coates’ works, but by many other notable composers.

During the last few years, John Wilson has appeared as conductor on many CDs for different labels, including several featuring the music of Eric Coates, and it is welcome news that he has embarked upon what promises to be a sparkling new  Coates series for Chandos Records.  John is widely acknowledged to be the foremost contemporary authority on – and interpreter of –  Coates. He gained his degree from the Royal College of Music with a thesis on the composer and has been the latter’s   untiring champion   for many years.

Earlier this year, John Wilson was the conductor  on a live radio broadcast  during which some of the pieces on the new CD were performed, including The Jester At The Wedding, and I believe that there is some linkage between that event and this CD. At the time, John spoke about the  items in the concert programme, during which he mentioned this work, which was commissioned for the Torquay Festival of 1932.

Although sub-titled Suite from the Ballet, the ballet in question never actually existed other than within the  imaginations of  Coates and his wife Phyllis.  John commented that

the fairytale storyline, [for which a synopsis is provided in the booklet], was probably more fashionable in the era in which it was written than it is in our modern world. On the other hand, the music, which ought really to be regarded as a ‘Concert Suite’, is certainly on a par with the composer’s more popular works, and deserves to  be better-known.

The programme on this new release generally concentrates on less-familiar pieces, although the two final items, By The Sleepy Lagoon and the London Everyday suite certainly need no introduction.

The performances, recorded by the BBC Philharmonic Orchestra at MediaCityUK, Salford, are first-rate, and John Wilson demonstrates once again that he has  great intuitive insight into these fine compositions.

Chandos Records are to be congratulated  producing  this CD and I’m sure that I will not be alone in eagerly awaiting the appearance of Volume 2 !