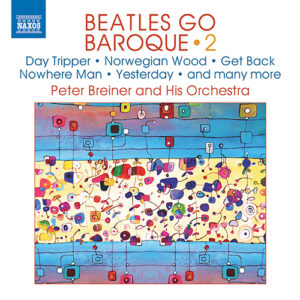 Peter Breiner and His Orchestra

27 years ago, the Naxos label released an album called ‘Beatles Go Baroque’, which is still listed in the catalogue (8.55510) having achieved multi-platinum award status. What we have now in their Light Music series is the sequel, going one better than the original by keeping the 18th-century masterpieces largely intact, stylishly merging them with the Beatles’ enduring melodies.

There are 27 tracks in seven groups.  So, for example, Vivaldi’s The Four Seasons is merged with A Day in the Life, Norwegian Wood, Octopus’s Garden, Because, Back in the U.S.S.R., Julia and Get Back; J S Bach’s Violin Concerto No.1 with I Want to Hold Your Hand, Something and Daytripper; and his Mass in B minor with Here, There and Everywhere, Yesterday and Hello, Goodbye.  The penultimate track is an ‘Abbey Road Medley’ of Golden Slumbers, Carry that Weight and The End, not merging with an original baroque composition but in a Vivaldi-esque orchestration.

The man behind the clever concept of this album and its predecessor is Peter Breiner, born Slovakia in 1957, one of the world’s most recorded musicians, with over 200 albums released and multiple streams and downloads. He is known as a conductor, composer, pianist and arranger – sometimes both conductor and pianist!  All the arrangements here are his.  His orchestra comprises 27 players from five different countries where they are soloists and members of leading orchestras.  The violin soloist is the internationally praised Dalibor Karvay, also from Slovakia, who started playing aged three.

The bright sound recording was made at Great Church, Bratislava in December 2018.   Full marks to the Beatles’ biographer Allan Kozinn for his excellent programme notes.  The jewel box inlay refers to “a joyously genuine 21st-century mashup” and there are certainly many smile inducing moments to be had from this release, allied to an advantageous price. Peter Burt