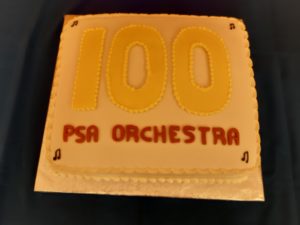 On 10th November this year, commemorations took place across Britain to remember those who died in the two World Wars and conflicts since. However, at New Eltham Methodist Church in South East London, another anniversary was marked, namely the formation of the Eltham Park Pleasant Sunday Afternoon Orchestra 100 years ago, or so we think. The Orchestra performs ten concerts per year on the last Sunday of the month (except August and December) at its base at Eltham Park Methodist Church, but gives an additional secular concert on Remembrance Sunday at New Eltham Methodist Church, so this seemed a fitting occasion for our centenary celebration.

This special Concert was promoted as ‘A celebration of 100 years of popular music with a Proms-style finale’, which resulted in much flag-waving by the audience as mezzo-soprano Marjorie Ouvry led us in Rule Britannia followed by Land of Hope and Glory from Pomp and Circumstance March No. 1. Lovers of light music were catered for with the inclusion of Up with the Curtain (Jack Strachey), Theme from London Fantasia (Clive Richardson) featuring pianist Carol Anne Wells and a selection from The Arcadians (Monckton and Talbot). It was also a pleasure to welcome back trumpet player and former Musical Director Martin Bunce, all the way from Eastbourne. 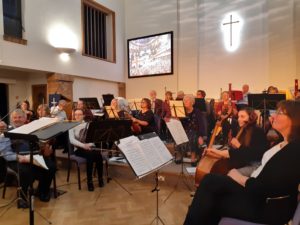 The Orchestra represents the chosen activity of the Eltham Park Brotherhood and PSA Society which, rumour has it, began meeting in 1919 ‘to promote the spirit of brotherhood in civic and industrial life’. By being one of the Church’s outreach activities it ‘endeavours, through music and fellowship, to promote a spirit of Christian citizenship’. Consequently, in addition to listening to the orchestral items, audiences have the opportunity to sing with the Orchestra, as a couple of popular hymns ‘bookend’ each concert, an experience normally reserved only for attendees at Songs of Praise broadcasts. It is believed that we are the last surviving orchestra to exist as part of this Brotherhood and Sisterhood Movement.

We currently have a membership of some 30 musicians with a good representation in all sections. There is a diverse level of experience throughout, with some using the opportunity to play on instruments they have learnt in later life: a flautist playing cello, a violinist playing french horn, a pianist playing bassoon, and so on.

The programmes for the Pleasant Sunday Afternoon Concerts, (or PSA’s) follow a similar pattern each month and generally last about an hour and a quarter, with the all important tea and biscuits to follow. We generally begin with ‘a bright opener’, something which involves plenty of ensemble playing and hopefully a fairly upbeat mood; recent examples have been Country Gardens by Percy Grainger or the first movement from Ballet Egyptien. Following a welcome from the Chair and a hymn, we launch into an overture of some sort, either a concert overture or one from an opera; this is quite often the only section from these works ever heard now. When did you last see Suppé’s Pique Dame or Thomas’s Raymond playing at your local opera house? We do try to integrate the more familiar with the obscure, so the works of Mozart and Rossini get an airing too. The central section comprises of something a little more substantial, perhaps movements from a suite, or two pieces which are in some way related; this year we have included excerpts from Handel’s Water Music, Serenata and Forgotten Dreams by Leroy Anderson and even the first movement of Schubert’s ‘Unfinished’ Symphony. One of the most popular parts of our concerts is the show selection. Here audience members can sometimes be heard humming along to numbers from musicals like Mary Poppins, The Student Prince or Guys and Dolls. As admission is free, a major part of our income comes from a collection which is taken at each concert. I feel this calls for a rather more subdued mood, (maybe Elgar’s Salut D’amour or Vaughan Williams Linden Lea.) One day I’ll have the courage to strike up Money Makes the World Go Around! Following a second hymn, we conclude with a rousing march. It might be classical (Aida, or Mendelssohn’s Wedding March), a military march of Sousa, or even something continental such as El Abanico or Amparito Roca.

As you can see, each programme is quite eclectic, and further variety is given by a featured guest artist, usually a singer. I try to introduce a theme (usually an anniversary) to give a common thread to the concerts throughout the year: last year, 75 years of the Rodgers and Hammerstein partnership; this year, the bi-centenary of Offenbach and Suppé. Next year will see the 150th anniversary of Franz Lehar. Each concert has a balance of about half light classics and half more popular repertoire. We also try not to repeat pieces within two years, unless there is a particular demand! This range of music is made possible by a collection of over 500 titles which the Orchestra possesses. It contains many light music titles by Coates, Ketèllbey and German, as this was widely available and very familiar to audiences when the orchestra was building up a library.

We have been fortunate enough to receive many donations over the years from musical ensembles long disbanded such as the Standard-Kolster Concert Orchestra, the Mountsfield Orchestra, Hither Green and the Royal Army Medical Corps Band. We’ve also been given the chance to increase the number of light music titles thanks to the loan by Brian Reynolds of pieces from the library of Hugh James, one-time regular broadcaster on BBC radio. These have included Heidelberg Polka (Cyril Watters), Hampden Roar (Fred Hartley), and Bows and Bells (Sydney del Monte), where we were privileged to have the composer’s son Howard in the audience.

If you would like any more information about the Eltham Park Pleasant Sunday Afternoon Orchestra, please contact martincleave66@gmail.com 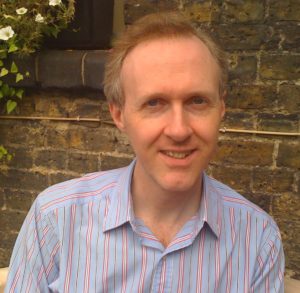