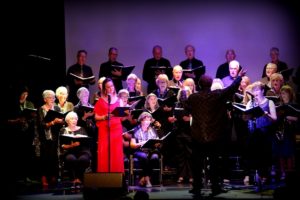 When you go to a concert and find a flag and a party popper on your chair you know you are in for a good time! This certainly proved to be the case in Clitheroe when the Grand Choir celebrated light music in all its forms, from the gently sentimental to the bright and brassy.  In the opening number, Give me a choral medley by Andy Beck, the choir obviously enjoyed the tongue in cheek promise to sing ‘song after song after song’. After a lively performance of Singin’ in the Rain (complete with umbrellas), conductor Daniel Adams transformed himself into a professor to put the audience through their paces in A Musical Punology.  Where the Gentle Avon Flows (better known as Ronald Binge’s Elizabethan Serenade) gave the choir an opportunity to change the mood with their lyrical story-telling.  Guest soloist Vicky Little excelled in We’ll Gather Lilacs, and later in the programme Roses of Picardy, ably demonstrating that light music, above all, is all about the melody.

The American composer, Leroy Anderson, was well represented in the concert from the romantic Serenata and Forgotten Dreams, to the jaunty Syncopated Clock and The Waltzing Cat. The first half concluded with the very British Bird Songs at Eventide by Eric Coates’ , whose Dam Busters March was then accompanied by much flag waving! 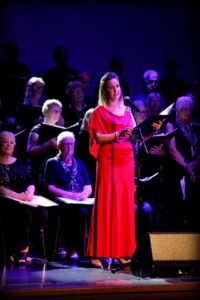 After the interval we were treated to an audio-visual presentation about an elderly Belgian gentleman’s attempts to identify his earworm – a tune that had stuck in his head for decades. His friends approached that fount of all light music knowledge, our ex-chairman Gavin Sutherland. On hearing the fragments of melody he immediately identified the piece as Intermezzo by Heinz Provost, from the film Escape to Happiness. It was wonderful to see the joy on Edward’s face as his long-remembered melody was played to him. Vicky Little and Dan Adams opened the second half by singing the Intermezzo.

The enjoyment the Grand Choir take in big chorus numbers is infectious, and this was shown in their exuberant performances of Together Wherever We Go and Everything’s Coming Up Roses, by Jule Styne. An Arthur Sullivan piece, A Policeman’s Lot, was sung by choir member Norman Kelly, with the backing of his colleagues. Vicky Little returned to give a superb performance of Vilja, and this was followed by the Waltz from The Merry Widow, which set the champagne corks – and party poppers – popping! The concert concluded in a reflective vein with You’ll Never Walk Alone.

The Grand Choir’s love of singing is evident, and under the direction of their choirmaster, Daniel Adams, they gave an impressive demonstration of their ability to switch from subtlety to pizzazz!