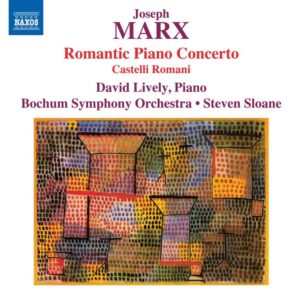 The latest in an ongoing series of re-releases from Naxos of Joseph Marx’s orchestral output features one nominal piano concerto and another that is a concerto in all but name. I have previously reviewed a number of Marx releases, which show the composer working in a variety of styles, but here we have Marx at his most romantic.

The first offering on the disc is Romantic with a capital R given the actual titling of this concerto as “The Romantic”. From the outset, we have a full blooded work scored for a large orchestra in which the piano is regularly part of the orchestral texture and not always treated as a solo instrument. Composed in 1918-19, it was premiered by the composer himself in a two-piano reduction, with the orchestral premiere taking place in 1921. As is typical of Marx, the structure is classically oriented with an opening movement in strict sonata form, a ternary form central movement and a rondo finale.

The demands on the pianist are immense in terms of virtuosity and endurance as the pianist is required to play for nearly the entire running time. The performance from David Lively is deeply impressive and Steven Sloane, as always, ensures the orchestra play the music passionately and intensely.

The problem with the Romantic Piano Concerto is that I found it became a bit of an endurance test for the listener as well. There is actually very little timbral and textural variety here, which is evident in several of Marx’s other pieces and at well over 40 minutes in length, the piece frankly outstays its welcome. One is left with a sense of a piece full of sound and fury, signifying nothing and I must confess I was rather glad when it finished.

Far less disappointing was Castelli Romani, which is effectively Marx’s second piano concerto and a far less performed piece in the composer’s output. Here, we find the composer inspired, as the title suggests, by the castles found around Rome and its provinces: Villa Hadriana, Tusculum and Frascati. Marx had travelled to Italy as a child (his grandmother was Italian) and regularly found inspiration in his memories of the beauty of the landscapes.

This work is not completely removed from the excess of the earlier concerto, but it is far more streamlined and has a considerably more sensitive orchestration. In this 1930 work, Marx’s interest in impressionism also shimmers through this music with an often Respighian tinge- some critics have felt too much so, but I didn’t find it too overt (Marx and Respighi were reportedly quite friendly). The first movement, once again, is based in sonata form and there is an interesting aside that might strike the listener familiar with Marx’s other works. The song cycle Verklärtes Jahr, written around the same time, contains a few motifs also found in the Castelli Romani– notably a figure in the final song of the cycle appearing in this first movement. The second, slow movement is one of Marx’s gems, musically referencing a garden village just outside of the city, one really gets an impression of dappled sunlight in this peaceful movement tinged with Debussian mystery, with occasional swells to romantic heights featuring coruscating figures in the harp and piano, while lush upper strings carry multiple enchanting tunes in octaves underpinning these delicate textures. The final movement is full of optimism and no shortage of humour, which might have been off-putting to the more conservative Viennese clientele when the piece was premiered. Opening with a lively flourish from both piano and orchestra, this movement delights in referencing Italian folk music styles, relaxing into what could easily pass for a light Italian ballad with an instantly catchy tune- even deploying the harp in a distinctly guitar-like manner. It is a warm-hearted endearing way to round off this highly underrated work.

I don’t know if it is the piece or the players, but every aspect of this recording of Castelli Romani feels focused and more contrasted than the Romantic Concerto (I suspect it is the piece) and left me feeling that this concerto alone was worth the purchase of the CD- a fine, uplifting late romantic work, which really deserves to be heard more often. DA