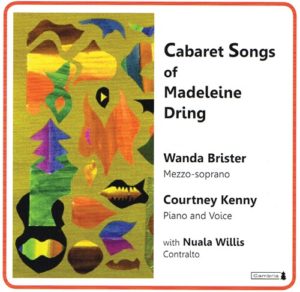 Madeleine Dring will be best known probably to vocalists and vocal tutors, who will be most familiar with Dring’s Shakespeare songs or Five Betjaman Settings, which are all great contributions to the 20th century art song canon. Oboists may also have some familiarity with her music for the instrument, much of which she wrote for her husband Roger Lord, who was an oboist with the LSO for 30 years) and there have been several releases of her solo piano and chamber works as well. That said, Dring is sadly not a household name for various reasons. During her lifetime, it was primarily her art music that was known and published, but an enormous amount of Light Music including music for west end revues and the contents of this CD went unpublished and has long languished in obscurity (See the article). There was also an opera and even orchestral music, most of which (even the occasionally macabre opera) have a light music flavour to them.

The present release represents a labour of love for the performers featured. Wanda Brister collaborates with pianist and theatre director extraordinaire Courtney Kenny (of Wexford Festival fame) and contralto Nuala Willis to produce a recording that demonstrates the composer’s variety and humour.

Opening with a number called Torch Song in which the singer entreats her lover to change just one aspect of his behaviour, assuring him that he can do almost anything to her, but “Don’t stop up the sink”, we are instantly in light-hearted mood. Subsequent songs range from the heartfelt and romantic to the gently humorous and sometimes the downright cheeky. The fourth track is particularly in the latter category, concerning the singer’s late-night liaison with her husband as they try to navigate their darkened flat without waking the neighbours by putting the light on or making too much noise: “I’m not complaining; I like you big and tall/ But quit making love to a twelve foot wall!”.

The two next songs on the album are from the west end revue Airs on a Shoestring, for which Dring wrote and performed much music, as did Flanders & Swann (Guide to Britten and Excelsior were written for this revue) and it even featured a vocal version of Arthur Benjamin’s Jamaican Rhumba. The two songs here are Snowman, a truly beautiful love song from a woman singing to a snowman built by the man she secretly loves and Model Models– a slightly racier subject about the absurdities of haute couture.

Appropriately enough, I listened to this disc on first on my way to a Prom concert in London, so my surprise at the song I Found the Proms resulted in a brief hoot of laughter to a bemused underground train compartment!

The disc is rounded off by three arrangements of Cole Porter songs by Dring: In the Still of the Night, Every Time We Say Goodbye and Where, Oh Where showcasing her supreme ability as an arranger as well as a songwriter. As mentioned, the CD was a labour of love and in some ways it shows. During a telephone conversation, Mrs. Brister explained to me that in some ways the disc represents a demonstration of the songs in order to say to other singers “Now you do better”; an understandable sentiment, but with perhaps an unnecessary degree of modesty as there is much to enjoy here. Brister’s voice is a pleasing mezzo soprano with barely a hint of her American accent in this highly anglicised set of song lyrics. Courtney Kenny himself sings on two numbers as well as playing the piano and given that he is now into his 80s, it is a voice in very fine fettle indeed! Willis only appears in Model Models, but her humorous delivery of the witty text is a joy.

This release follows on from a previous recording of Dring’s complete published songs, which also features the wonderful tenor Stanford Olsen and boasts fine interpretations of the Shakespeare and Betjaman songs. Both also feature cover art painted by Dring herself revealing her talent as a visual artist as well as a singer, composer and actress and everything else for that matter! In short, a great slice of lesser known British Light Music performed with affection and flair by genuine champions (and thank goodness they exist) of a wonderful composer’s work. DA