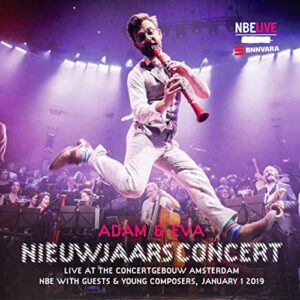 With Guests and Young Composers

Most of us will know and love the staple that is the Vienna New Year’s concert, which I never fail to catch at least some of when enjoying the winter holidays. If you love the Vienna concerts, you will be familiar with the fun had in these events, though Vienna remains viewed one of Europe’s most conservative cities. By way of contrast, these events from the Concertgebouw in Amsterdam, one of Europe’s generally viewed most liberal cities, might feel like an opportunity to let you hair down by way of contrast.

All too late, having purchased several of NBE’s new year concerts as digital downloads, did I realise that the solid state CD editions are really the way to go! The real plus of the purchase of a physical copy of one of these albums is that you also get a feature length DVD so you can also watch the concert should you wish as well as listening to it.

Programmed to within an inch of their lives, the NBE’s New Year concerts are generally themed, however loosely, featuring the professional musicians of the ensemble, usually vocalists and guest musicians as well as winners of their young composers competition. The theme here was Adam and Eve- the first humans according to the Judeo-Christian myth. In a poetic introduction in the package, Micha Wertheim describes the theme as being about humans discovering love, conflict, reconciliation and difference starting from the first humans, presumably to do so. Other famous duos and couples are referenced over the course of the evening: Orpheus and Eurydice, Romeo and Juliet, Acis and Galatea- even referencing Elvis and Priscilla Presley along the way!

To call the proceedings eclectic would be an understatement: I can’t think of many other concerts in which classical, light music and modern idioms of pop, rock and blues go so hand-in hand.

Adam en Eva begins with the Kyrie from Mozart’s Mass in C Minor, the traditional opening of the mass setting- a prayer for mercy- during which on the stage, we see a gigantic stone monolith, from which two instrumentalists (presumably representing Adam and Eve) emerge- they are a flautist, Jeanette Landré and clarinettist Tom Wolfs, who take the lines usually performed by vocal soloists on their respective instruments, whilst a choir intones Mozart’s original choral setting. This is followed immediately by an arrangement of John Adams’ Fearful Symmetries featuring some truly impressive dancing from Ish Dance Collectief (Feadan McCall & Zeno Schat).

There are three winners of NBE’s young composers competition featured in this year’s concert: double bassist Casper Groep, cabaret duo Sijmen McDonald and Teun de Vries and singer/songwriter Ben Forte. All show real promise as musicians and composers and what a great opportunity to be able to perform in the Concertgebouw at this event. It is here I have my only real quibble with the package, however, which is that there are no subtitles or translations and, with singer/songwriters and cabaret artists, the lyric is paramount and I confess I did struggle to understand everything being said/ sung with my more than ropey Dutch!

Another couple of great highlights for me were the beautiful vocal stylings of Wishful Singing in their five part arrangement of Are You Lonesome Tonight. This is followed up by clarinettist Bart de Kater and percussionist Jeroen Batterink as the former hurls himself around the auditorium of the Concertgebouw to Martin Fondse’s Happiness (a contemporary number that is somewhere between jazz and Light Music), some of his hijinks drawing audible gasps from the audience. Two dancers join the fun for Good Golly Miss Molly, an arrangement of Little Richard’s piece and the whole thing is rounded off by Adam and Eve returning to the stone monolith before the ensemble dance on and around it. I should mention along the way, we also encounter Klezmer, steel drum and a dizzying array of folk music from around the world- it is truly astonishing how many nationalities are represented on one stage.

There are four individuals responsible for most of the arrangements in the concert- one of them artistic leader Julian Schneemann and his son Julian and the others are Frank van Nus and Hans van der Heide and what a great job they do! As someone very familiar with the orchestral sound, I suspected I’d miss the presence of strings, but with arrangements this skilful, one almost doesn’t notice (see also the arrangement of excerpts from Mahler’s 8th Symphony in their 2015 new year concert).

Aside from the musical fireworks, the spectacle is also deeply impressive. Everything is carefully staged and choreographed with simple but effective use of the crowded stage, which is one of the reasons the viewing experience is every bit as joyous as the listening experience. This is good theatre, good music, and above all- good natured and with great performers. DA