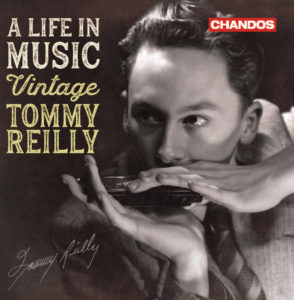 This excellent  new release on the CHANDOS label has been created to commemorate the centenary of the Canadian-born virtuoso harmonica player Tommy Reilly [1919-2000].

Our very good friend and stalwart LLMMG supporter Sigmund Groven – himself an internationally-acclaimed harmonica virtuoso, and former protégé of Reilly’s – has, in collaboration with Tommy’s son David, compiled a wonderful selection of recordings spanning the years 1945-1988. The two have been working on this project for some time and more than a year ago I was informed by Sigmund that the CD was ‘in the pipeline’

The accompanying mini-biography relates how Tommy Reilly, at the age of eight, commenced  studying the violin, and from the age of eleven became fascinated by the newly-introduced German-manufactured Hohner chromatic harmonica. The world’s first harmonica band was established at his school at St Thomas, Ontario, and Tommy became the band’s soloist and  gold-medal winner in 1932 and 1933.

The Reilly family moved to England in 1935, and the young Tommy soon embarked upon a career as a professional harmonica player. By 1937 he was to be found touring Europe and – whilst performing in Leipzig – he took the opportunity to further his violin studies at that city’s famous music conservatory.

The very day that Hitler invaded Poland [September 1st 1939], he was arrested by the Gestapo as an ‘enemy alien’. The following five years and eight months were spent locked-up in various internment camps across occupied Europe. Notwithstanding that this was a most difficult and unpleasant experience, he used the opportunity to practice and develop techniques on the harmonica that had never before been attempted.

He modelled his approach on the playing of his idol, the violinist Jascha Heifetz, particularly in regard to vibrato, trills and phrasing. He believed that having been a violinist was his most important influence, and those years of technical development became the foundation for the future of chromatic harmonica-playing worldwide.

Returning to post-war Britain in 1945, Tommy soon became a ‘regular’ on BBC radio, playing on variety broadcasts, and he also appeared in classical concerts. Later on, he would write and perform themes for a number of popular radio and  television shows, and was often featured on the soundtracks of leading film-music composers.

During a long and distinguished career, he  collaborated with many diverse personalities including Benjamino  Gigli, Marlene Dietrich, Robert Farnon, Bing Crosby, Peggy Lee, George Harrison and Barbra Streisand. Tommy was also regarded as an unequalled teacher and spent many years encouraging his students to develop their talents and fully exploit the potential of their instrument.

The CD’s very generous thirty tracks have been assembled from a mixture of BBC off-air recordings, (some in front of ’live’ audiences), studio performances which took place in Norway and Germany, and commercial discs, principally on the Polydor and Parlophone labels. The latter were produced by a young George Martin, who at that time [c.1950] was experimenting with echo, ‘overdubs’ and similar special effects at EMI’s Abbey Road studios in London.

The musical programme features ‘classical’ works – viz. short pieces by, inter-alia, Domenico Scarlatti, J.S.Bach, Rachmaninoff and Mozart – [an amazing, albeit abbreviated, version of the overture to The Marriage Of Figaro] – interspersed with a number of well-known ‘popular’ items such as Deep Purple, El Cumbanchero, Dinah and Jealousy. In addition, there are a number of original pieces written for the harmonica, including some composed especially for Tommy Reilly; everything is performed with his incredible dexterity and precision.

The well-presented illustrated booklet contains comprehensive and very informative notes authored by Sigmund Groven and David Reilly and the whole production is up to the highest standards which are the hallmark of Chandos Records.

In his time, Tommy Reilly was considered by his professional colleagues, and the music-loving public, to be the world’s finest exponent of the chromatic harmonica. In 1992, he was awarded the MBE for his services to music, the only harmonica player ever to be so honoured.

This CD pays homage to his enormous talent and definitely deserves a place in the collection of every  harmonica aficionado.