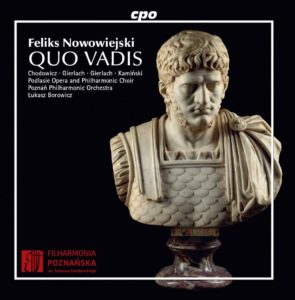 We’re not joking when we say you never know what you might find in the LMS Library, you know! I asked for a review copy of this CD purely because I’d seen the composer’s name on a shelf in the library, expecting a lighter work on the nature of Ancient Rome. This is, however a gargantuan oratorio for choir, soloists, orchestra and organ running to over an hour and a half in length. Similar to the way Coleridge Taylor’s Hiawatha out-performed Handel’s Messiah in this country at one point, so, just about a hundred years ago, Nowowiejski’s Quo Vadis was the biggest hit in concert halls all over Europe. The story, based upon the book of the same name by Henryk Sienkiewicz (who went on to win a Nobel Prize) is an epic saga about Christianity in the time of Nero and the burning of Rome, though the overall theme is generally humanistic and rejects the politicisation of religion. The composer, interestingly, whilst born in Poland, did not speak the language and so set the oratorio originally in German, but the present recording has been painstakingly translated into the language of the novel on which the oratorio is based.

It is genuinely hard to describe the overwhelming impact of hearing this piece for the first time. Upon it’s premiere at the Concertgebouw in Amsterdam, the Dutch press raved “when the final chords subsided, indescribable enthusiasm erupted in the hall” and the impact spread like wildfire across Europe’s concert venues. The music is relatively conservative for a piece written in the early twentieth century, but it masterfully combines high romanticism with plainsong chant and other elements suggesting an ancient story.

The performances are just phenomenal: choir and orchestra do a magnificent job without a note out of place and the diction of the massed voices is second to none. Both Gierlachs (I’m not sure if they are related, but they are both graduates of the same establishment under the same teachers at roughly the same time) excel as baritone and bass soloists respectively. Especially moving are Robert’s arias in the character of St. Peter. Chodowicz’s voice is a superbly rich soprano and her performance in the work is incredibly powerful without ever being over-the-top.

This oratorio is a genuinely major work and I hope we can see a rekindled enthusiasm for it as this recording will undoubtedly garner much attention. There is a well assembled booklet with the CD but sadly no libretto. Fear not, however, as there is a detailed synopsis and more than one essay commentary on the work including a generous and enthusiastic interpretation by the conductor Maestro Borowicz. A must hear for lovers of large scale choral works. DA