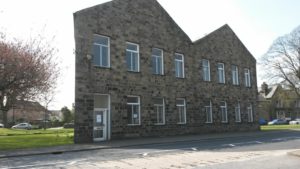 This is a bit of a bumper edition as far as library news is concerned, due to the fact that there has been so much happening since Spring. First, we must stress that the library is still running as normal, and we will continue to process orders as swiftly and efficiently as we can.

As many will know the plan to move the entire library to new premises is now under way. Due to a most generous legacy from the late Miss Sheila Mackellow, we are grateful and relieved to find ourselves able to start the move away from Lancaster Farm and put the Library on a firmer footing. At the beginning of April, the Light Music Society became leaseholders of Magna House in Long Preston, near Settle in the Craven district of North Yorkshire. This used to be the home of Magna Print – a purveyor of large print books, for which our wonderful committee member Sarah Glossop continues to work. Prior to becoming Magna Print’s property, the building had been a thriving wool warehouse, in which fleeces were stored in hessian sacks before being sent to woollen mills in Bradford. It subsequently became a warehouse for Johnson & Johnson’s before becoming the home of Magna Print and audio.

The size and location of the building on the main street of the village is striking, thanks in part to the fact that the building could be referred to as a “spite” building – erected to cock a snook at some locals who objected to the original planned position.

The building is simply enormous – bigger, in fact, than our current needs for the library – but we were offered such a generous deal for the lease that we can safely say that this was an offer we simply could not refuse. The building is two storeys, featuring a very spacious warehouse downstairs and copious office and library space upstairs. It also includes space that can be used as a reception area, meeting rooms, a kitchen and a common room. The opportunities presented by this fabulous new facility are immense.

A complicating factor in the organisation of the LMS library is that the initial collection expanded considerably by the addition of other people’s libraries. These arrived at different times in the development of the library, which made it impossible to amalgamate all the disparate collections into one gigantic library. This has unsurprisingly been a source of headaches for the librarians. The lack of space to shuffle libraries in order to amalgamate music has often presented challenges. The amount of space at Magna House means that this process of sorting and, ultimately fully cataloguing and digitising the collection (a behemoth of a job!), now has more room to develop.

Measuring the space has already facilitated some fairly swift moving of collections, as it gave us a clear idea of exactly where the different collections could be housed. The first job was to re-space and re-position shelving units in the upper story of Magna House to accommodate collections that would fit easily on this floor. We wanted to ensure that the “core” of the library (the collections that have the majority of music requested by member orchestras) would be accessible in the upstairs offices.

In order to ensure that the library can continue to run and provide the service to members as usual, we decided to pack up, move and re-shelve libraries one at a time. As far as possible this means that music isn’t still in boxes when people ask for it! It is fair to say our initial estimates of the tonnage of the music was extremely low. We managed to calculate the approximate weight of the music that has already been transported to Magna House as about 11 tonnes. That figure accounts for about 50% of the library, so while we have done very well so far, there is still a long way to go! 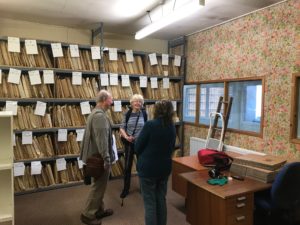 The music is usually packed up on a Friday, transported on a Monday and shelved on a Tuesday or Wednesday! This ensures the least amount of time for the music to be inaccessible. Magna House is about 25 miles away through stunning countryside. As we have had the most beautiful spring the journeys from the Ribble Valley in Lancashire to the Yorkshire Dales have been most enjoyable. And we are still close to the river Ribble when we get there! Long Preston itself is a lovely village. It has a thriving and enterprising village shop/post office close to Magna House (very necessary for us) and also a railway station.

The first collection to go was the library we refer to as our “CD Collection”. This name came about in the early 1990s when the Marco Polo record label (part of Naxos) announced plans to release a series of CDs of British Light music. ET became the consultant for the series as he had most of the music that the publishers had thrown away. He also conducted five CDs in the series, and of course many later CDs were conducted by Gavin Sutherland our chairman from 2009 to 2018. ET and his wife Jean (with the help of any visiting grandchildren) amalgamated all the works by composers suggested for the series into one library. This made them more easily accessed and the music could be assessed for recording. This library includes all the works by Eric Coates, Ronald Binge, Trevor Duncan, Albert Ketélbey and Haydn Wood and about twenty others. It forms a vital part of our library and is very actively used.

Following this, the Selections library was taken to Long Preston. This is another popular and often used section containing selections or medleys mainly from stage shows and films. This then meant that several empty shelf units could be transported from Lancaster farm to Long Preston. Also easy to take was the collection which had previously belonged to Max Jaffa.

Ernest Tomlinson had a considerable personal collection of music aside from his own compositions, amassed during his broadcasting years. This was the next to travel to our new home, followed by two very major collections – those from Frank Cantell and Frederick Stocks. These are particularly important, not just in terms of size, but also in terms of the material within them. There are several very well known Light Music pieces alongside a number of major classical works and several original and unique pieces that we believe are unavailable elsewhere. The libraries from Blackburn and Kent music services then followed (Kent being a particularly large library meant this was no mean feat!). 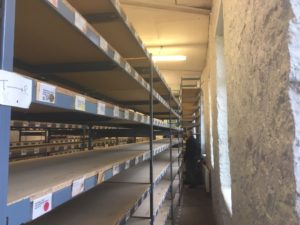 At the time of writing there is one library left to be taken to the upper storey of Magna House; the Fritz Spiegl Library. As many of you know, this library belonged to the musician, collector, humorist and composer Fritz Spiegl, (famous for the Z Cars  and Radio 4 theme tunes) and contains an array of light music and salon music.

The ground floor of Magna house is cavernous and imposing. This means that not only can it easily house the remaining libraries (including those from the Blackpool Winter Gardens, Walter Collins, Heart of England Orchestra, Marcus Martin and the collection of composer Alfred Reynolds), but we also have space to amalgamate large amounts of music, which will help in the cataloguing process. At present, there are thousands of uncatalogued pieces, sorted only in alphabetical order of composer, situated on the “back wall” of the barn. This contained a huge number of pieces that would be considered mainstream classical repertoire so we have been working on assembling a “classical collection”. As we have packed up music  we have seen much mainstream classical material in other collections, so it is likely that this section will expand considerably. The good news is that now we have the space.

The next stage of our plans will be the relocation of the office which we hope will be within the next month. However, please note that for the time being everything is still processed at Lancaster Farm, and all music must be returned to this address. There are no plans to sell Lancaster Farm and we anticipate that moving the rest of the library will take several months more. There will have to be a great deal of coming and going. We cannot move any further collections until the downstairs shelves at Magna House have been repositioned and that will take a few weeks.

And yes, the LMS AGM Weekend in August will be in the barn at Lancaster Farm as planned. Details are on page 5 and a booking form is included with this magazine. However, our usual library open day on Bank Holiday Monday will be at the new premises so there will opportunity to view progress.

We look forward to seeing as many of you as can make it. 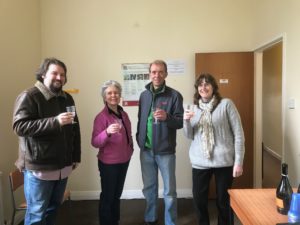