Contemporaries of the Strauss Family- Vol. 4 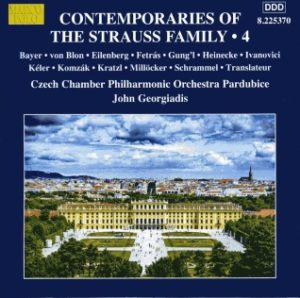 The fourth in a seemingly ongoing series of releases of light orchestral music from Marco Polo featuring European contemporaries of the Strauss Family, though I’m sorry to say I’m late to the party, as this is the first of the series I’ve heard. But what a party it is! It might, sadly, be possible to view the present release as something of an “also ran” compilation, but this would overlook the sheer variety of music on show here. Granted, not all of the composers on this disc possess the sheer orchestral flair of The Waltz King himself, but in terms of sheer melodic invention, this is an embarrassment of riches. An early standout on the CD is Siegfried Translateur’s Daiabolo Galop, a wonderfully entertaining piece by a Jewish composer, who, sadly was one of the many Jewish composers who died in concentration camps in the Second World War. Little of the composer’s life struggles on display in this piece, however. Many of the composers featured here also have music available from the Library of Light Orchestral Music, including Oscar Fetrás, whose upbeat Juchei Tirolerbub march opens the disc, Carl Millöcker (of Bettelstudent fame), Hungarian composer Béla Kéler, Karel Komzak III and Josef Gung’l. Kéler’s Galop Sempre Crescendo is a true example of lat 19th century exuberance, while Komzak III’s In der Zaubernacht waltz is the most recent work on this disc, dating from 1908. It is in true Viennese style and interestingly, of the same generation as Johann Strauss III. Both are the least well known of their musical dynasties, but, as the liner notes inform us, both produced some truly excellent music. The Komzák family actually originates from Bohemia (now the Czech Republic) and Karel III followed in the footsteps of two other Karels- his father and grandfather, the former of whom died in horrific circumstances when he accidentally fell from a slippery railway platform under the wheels of a train he was attempting to board only three years before this delightful waltz was written. A particularly generous waltz on offer here is by Josef Gung’l, whose Pandekten-Walzer from 1868 begins mysteriously with a beautiful introduction for solo horn accompanied, perhaps surprisingly, by saxophones and leads into a gently lilting waltz that is entirely typical of the period, yet wonderfully evocative. The last word on the CD goes to Kéler, whose Vom Rhein our Donau waltz really follows proudly in the footsteps of Strauss II rounding off a thoroughly uplifting release.

I can’t round off the review without a mention of conductor John Georgiadis, who also serves as arranger on numerous tracks. His orchestrations perfectly fit the styles of the time and the orchestral playing is uniformly superb- the entire series is a credit to the Czech Chamber Philharmonic Orchestra Pardubice and their music director and I look forward to volume 5! DA