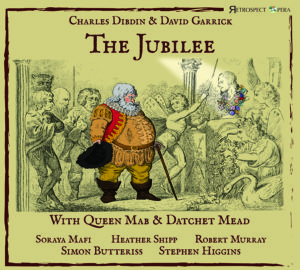 Actor and writer David Garrick revolutionised the British theatre in the 18th Century. A friend of Dr. Samuel Johnson and repertory actor for some time, Garrick eventually took over the management of the Theatre Royal, Drury Lane in 1747. He was noted as an actor for rejecting the convention of “stand and deliver” when it came to delivery of lines, a newspaper at the time once commenting in astonishment “Garrick acts even when he is not acting!”- which is to say he performed reactions to other people’s line delivery, rather than only emoting during his own declamations. It might sound odd today to comment on such a thing, but at the time, this was unheard of. Equally innovative were Garrick’s use of elaborate scenery and even special effects, which was said to include a wig, which stood on end upon the appearance of the ghost of Hamlet’s father!

Garrick also took on the ownership of several of London’s newspapers at the time and so, when it came to his “Shakespeare Jubilee”, he was able to whip up a veritable media frenzy about the event. More accurately, this was to be a series of events, which took place in Stratford-Upon-Avon in 1769. Garrick had employed Dibdin at Drury lane in 1768 and decided to collaborate with him for song settings for events as part of this Jubilee. The collaboration, it seems was fraught, but arguments aside, Garrick seems to have brought out some fine music in Dibdin, as this CD will attest.

The majority of the music on the disc was first heard on the 6th of September 1769, though it is important to note that there are three separate works on this disc, two of which are linked by theme, but are stand-alones nonetheless. Queen Mab takes as its inspiration a fictional fairy referred to in Romeo And Juliet, who decrees that a fairy jubilee be held at Shakespeare’s tomb in his honour. Much of the spoken text from the three pieces (in the case of Queen Mab, by Isaac Bickerstaffe) has been omitted in order to give the music pride of place. The Jubilee is a little more directly connected to the exact jubilee in question and takes a humorous dialectic debating Shakespeare’s enduring greatness and featuring much celebratory music. Datchet Mead, written some time later, was conceived as one of Dibdin’s intimate shows at his own tiny theatre- it is almost 18th century cabaret!

Queen Mab is the only part of the CD to feature a small ensemble, beautifully executed adding to the piano stylings of Stephen Higgins, but the rest are all accompanied solely by piano. Higgins, on this recording, is playing an 1801 Broadwood piano- the nearest available instrument to the one that Dibdin would have played himself at his own performances. The sound is profoundly different to instruments with which we are now familiar, but it is a particularly welcome addition here, as it really helps set the scene as it might have sounded at the time. Higgins, who graced Retrospect’s previous Dibdin release with his playing is undeniably the best man for the job here and clearly has a feel not only for the period, but also the capacity of the instrument. Simon Butteriss also appeared on the Christmas Gambols CD and it is thrilling to have him back for this one. In many ways, he has the hardest job, as it is down to him to not only play the role of Dibdin the impresario, but also multiple characters he created- it is a tour-de-force of vocal characterisation and sensitive singing. Three other voices are present at different times on the recording: the soprano Soraya Mafi, who carries the air O Happy Bard in Queen Mab, which is a real highlight of this recording for me, mezzo Heather Shipp, who sings the comical All this for a Poet in The Jubilee with fantastically pithy humour and tenor Robert Murray, who shines as the fairy minstrel in Datchet Mead– particularly the charming aria Shepherds Bring the Oaten Reed. As an ensemble, it is a dream team- blending beautifully with one another in the (rare) full ensemble moments and none sounds out of place in the period music, which is perhaps an odd thing for me to say, but I imagine singing with the 1800s piano presents challenges in itself.

Listeners of light music really should cherish this as a true example of light music of another century; it is full of humour, wit and great tunes. Dibdin, a self taught composer, eschews over-complicated writing in favour of straightforward verse and chorus songs, that the audiences at the time and I hope you, too would not be able to help help humming happily to themselves long after they had first heard them. DA