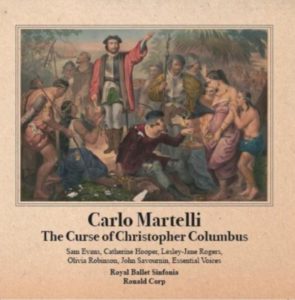 Carlo Martelli is an unmistakably contemporary composer, whose sound is easily identifiable by its inventive use of tonality (fairly regularly, polytonality) and instrumentation. The Curse of Christopher Columbus (Described and commissioned as a children’s opera) is a sophisticated and engaging theatrical work. It contains language that is relatively straightforward in Chris Eldon-Lee’s witty libretto, meaning that it can be understood easily by young and old alike. The result is a musical fable, with elements of parable and satire, full of musical allusion and invention, in an opera that is frighteningly apt in our society at present.

The piece opens in an art gallery and, after a prelude introduces many of the central musical themes of the work, a caretaker enters (Lesley-Jane Rogers), who feels a sense of premonition. Other gallery guests arrive for the unveiling of a statue of Christopher Columbus. The VIP arrives, sung by John Savournin (introduced in the orchestra with a quote of The Star Spangled Banner) praising the “most renowned explorer” who discovered “his land”. Savournin interestingly does not Americanise his performance as the VIP, who is fairly obviously a character from North America, but this does at least sidestep the pitfall of caricaturing the figure too much and, of course, the orchestra and text tell us everything we need to know about the character’s heritage. The Caretaker, incensed by the nationalistic content of the VIP’s speech and unquestioning praise of Columbus interrupts. She informs the assembled crowd that Columbus was selfish, a murderer and a plunderer and because of his actions his original Spanish name is five times cursed. She then proceeds to say his name boldly and causes the statue to come to life. She and the figure of Columbus travel through time to revisit parts of the explorer’s exploits and reveal why he is cursed.

It strikes me theatrically as a particularly ingenious way to introduce the story of Christopher Columbus in a modern setting and the framing of the narrative also provides us with the context we need to question the “greatness” or otherwise of the titular character. As I mentioned, in an age which has seen statues of Columbus vandalised (often with red paint and graffiti, once with an axe), the opera’s finale has an eerily similar quality when viewed in the light of current affairs. Columbus is presented in this piece as cynical and two-faced, but baritone Sam Evans thankfully manages to imbue him with qualities of reflexivity and sympathy toward the end as the protagonist realises the error of his ways. However, it is Lesley-Jane Rogers as the caretaker (among other roles) who steers the action of the piece and provides the audience with a sympathetic face throughout and a pointed commentary on the unfolding actions.

Musically, the liner notes describe the style of the piece as eclectic, which does make sense. It is also important to point out the stunning unity that Martelli weaves into the score in order to prevent the combination of styles from feeling too different to be coherent. Credit is also due to the Royal Ballet Sinfonia under Ronald Corp in this respect to provide an interpretation that understands this aspect of the music. Naturally, the ensemble carries the whole score with great aplomb and it is a credit to them and the composer that the instrumentalists are every bit as much storytellers as the cast. As mentioned, the score is full of musical allusions, most notably, the aforementioned Star Spangled Banner as well as the Largo movement from Dvořák’s New World Symphony, which Columbus sings two arias to in an ingeniously transformed setting. There were, of course, three excerpts from this piece on the previous Martelli release from Borough Music (Sredni Vashtar) and it is fascinating to see how they fit into the work as a whole. These were the overture, an orchestral interlude Casting Off and the frigate birds’ duet The Genius Song, all of which produce memorable melodies for the listener. Martelli, clearly a lover of a story with a sting in the tale, doesn’t shy away from musical “shock tactics” where necessary either- particularly notable in the scenes of violence and in the final moments of the work. Here, the polytonal writing is given a startling outing, with jarring chords in the brass coupled with stark open fifths in the strings.

All in all, I consider this a revelatory recording, since it is the first opportunity to hear one of Martelli’s stage works on record since its premiere. A valuable addition to anyone’s CD collection for sure, so now let’s get campaigning for more live performances! DA