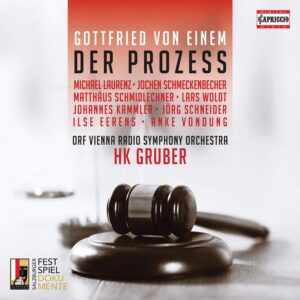 Franz Kafka’s terrifying novel following the downfall of a man on trial for the crime of existing must have seemed particularly potent as a subject, when Gottfried von Einem composed an opera on the subject less than a decade after the horrors of the second world war. The composer himself found himself falling foul of the totalitarian regime in his native Austria with performances of his music being banned by Goebbels, but defiantly continued to help Jewish musicians that he knew to continue working. His teacher, Boris Blacher would write the libretto for the work.

Given the subject matter and the period in which the music was written, I must say I was braced for a work that could potentially be rather hard on the ear, but the piece surprised on a number of levels. Opening with a clock chiming and the ringing of a bell, which the protagonist Joseph K. summons his maid with some breakfast, he is greeted by an unknown figure who tells him that he is under arrest. The two bells aside, the opera actually opens not with music but with spoken dialogue, into which drifts an orchestral accompaniment and the characters begin to sing- the first music in the piece being almost reminiscent of German Kabarett music. It would be fair to say that much of the more sinister music appears in these earlier scenes, later to be replaced by music that consciously highlights the absurdity of the situation. The structure of the work is essentially episodic with each relatively short, punchy scene, being rounded off neatly by a cadence, without segue-ing into the next tableaux. One senses the unquiet spirit of Brecht might have been at work in this style of montage presentation of the work.

On the whole, the piece is a very tuneful affair (despite the presence of only one 12 note row), though it should be pointed out that much of the singing is in extended recitative form with few standout arias until the penultimate scenes of the second act. Much of the tuneful and indeed very catchy material is carried primarily by the orchestra, combining popular modern styles of the day, in particular jazz, with occasional bursts of almost pastiche neo-classicism. Paradoxically, it seems to me that, as the story becomes darker, the music becomes lighter. One is inclined to think of Weill, Stravinsky and even Benjamin Britten as the work progresses, but it would be a mistake to view von Einem’s music in the light of these possible influences. There is an original voice at work here, which rejects stylistic classification, throwing disparate styles together to add to a sense of unease. This is essentially light music on the surface, but used to fundamentally subversive purposes.

The ORF Vienna Radio Symphony Orchestra, in many ways steals the show, carrying, as it does, so much drama that goes unsung by the characters, by turn illustrating their confused thoughts, the forced pomposity of the trial itself and the various sounds of the city. The playing is extremely assured thanks in part to the conducting of H.K. Gruber, himself a fine composer and student of von Einem. The overall tightness of the ensemble is sometimes a wonder to behold in the striking homophonic passages and in music, which, overall rhythm is everything.

But, this is, of course, an opera and there is more than a little very fine singing on display here. In the role of Joseph K. we have Michael Laurenz, who is on stage for essentially the entire opera and it is his voice who sustains most of the story. The role itself is challenging from a stamina point of view, but also in terms of range, as there are a number of moments in which the character finds himself simply screaming to figures of authority about his ill treatment. Laurenz is impressive throughout all of this and by the end of the piece he shows little sign of tiredness (this is a live recording). Other characters are often only on stage for a short amount of time, thanks to the episodic storytelling, thus, in this performance, all of the other singers take on multiple roles. Particularly impressive amongst them is Jochen Schmeckenbecher, who takes on four roles at different times in the piece, characterising each in a distinct fashion, even noticeable to the listener without a visual aid. Three female roles are admirably voiced by Ilse Eerens, who must take roles that are in turn sympathetic and antagonistic to the protagonist- no mean feat in itself. This is, of course, an ensemble piece with no chorus, so the entire cast deserve praise in relation to their ability to characterise the complex canvas.

The premiere of this work was at the Salzburg Festival in 1953, at which the critics were divided over whether or not Einem had really captured the mood of the novel, but this recording from last year gives a real opportunity to reappraise this fascinating work. DA