When Emeritus Professor Chris Green walks on to the stage on14 September 2019 at Snape Maltrings, three anniversaries will be celebrated. The first marks Chris’ sixty years of conducting and inseparable to that his sixty years as Artistic Director of Trianon Music group; the second is 60 years of Trianon as a musical entity. The purists will point out that it is the orchestra that started as a small ensemble in 1959, for the choir came later in 1964, but on this occasion, who cares?

The programme includes some of Trianon’s signature pieces such as Britten’s arrangement of the National Anthem – a work in which Chris sang as a young student at University of Leeds in 1961. Vaughan Williams’s Serenade to Music also has a personal connection for one fo the 16 singers in the premiere- soprano Lillian Stiles-Allen, taught Chris singing. The finale from Puccini’s Turandot and Carl Orff’s Carmina Burana complete the signature pieces.

Trianon has commissioned six pieces this year, and included in the programme will be the world premieres of Jubilee Fanfares by Carl Davis, and Diamond Overture by Matthew Curtis.

For full; details of Trianon’s activities this year, visit www.tmg.org.uk 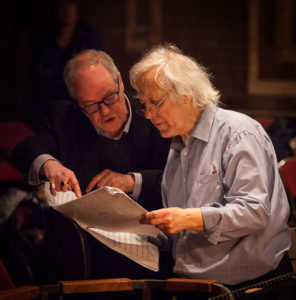 Picture: Professor Chris Green and composer/condcutor, Ronald Corp at the preparing for the world premiere of Ronald’s new work for Trianon, Jubilant Song!