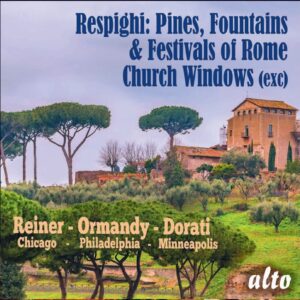 When I was a youngster, I was introduced to the “wonders” of the long-playing record by a visitor to my grandparents. He worked in an American air-base and they loaned out recordings to staff. One of them was of an LP with Antal Dorati conducting the Minneapolis Symphony Orchestra in Tchaikovsky’s 1812 Overture. Our newish Radiogram could just about cope with the orchestral score, but rebelled at the explosions that Mercury Recordings had added to the work. It was wonderful.

Now, 74 years later, two more tracks recorded by the same orchestra and conductor have re-appeared on an Alto reissue. Dorati conducts the Minneapolis Orchestra in two of the four Church Windows by Respighi.

Given that the CD reissue lasts just over 76 minutes, there was little more space because it already comprises the three other Roman Suites by the master of the colourful. Respighi fascinates me- he contributed much to the renewed interest in old Italian music and yet produced this series of over-the-top orchestral suites- requiring a vast orchestra and vying for a place at the top table of the world’s loudest music.

Here those pieces emerge in recordings from between 1955 and 11961 in sonic detail as the orchestra resources veer between the stillness of early morning in Rome, and the savagery of the arena as gladiatorial combats take place in Feste Romane. Altogether it adds up to a loving renewal with my youth and an object lesson in how to present “in your face music” in a musical way.