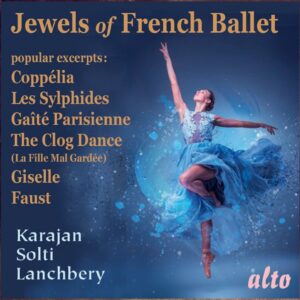 Nearly 80 minutes of undiluted brilliance and great tunes at a super-budget price should be a sure lure to anyone who enjoys “light” music. From the outset, the brilliance of Decca’s 1960 recording of music by Offenbach in the effervescent and unauthentic version by Manuel Rosenthal for Gaieté Parisienne launches this reissue into orbit. Paris is awash with visitors for Le Grande Exposition, and Offenbach obliges with a succession of operettas from which Rosenthal took a selection to turn into a ballet in 1938. Sadly it would be not long before the sound of jackboots would be heard on Paris streets, but for a short while this reworked music brought to the fore the night clubs of the capital with characters relocated from Offenbach’s La Vie Parisienne.

What follows continues the love of French audiences for ballet with grande opéra requiring such interludes. Gounod supplied dance for Faust whilst John Lanchbery’s realization of tunes by Ferdinand Hérold for La fille mal gardée has provided the ballet repertoire with one of its great scores. All of this and more is to be heard in Jewels from the French ballet, and once again the verdict is that the Decca and Deutsche Grammophon engineers really knew how to place their microphones in the early 1960s for great stereo, re-mastered by Paul Auden-Taylor. The disc ends with Roy Douglas’s masterly orchestration of piano music by Chopin for a 1936 production of Les Sylphides –  a fitting reminder of the debt so many composers owed this skilled orchestrator.