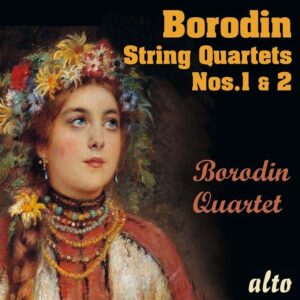 Whether he ever intended it or not, Borodin provided us with some glorious tunes many of which found their way into the Broadway musical Kismet. At the same time there are some other splendid works such as the three symphonies and the Polovtsian Dances that complement many programmes.

The Borodin Quartet initially included luminaries such as Rudolf Barshai (viola) and Mstislav Rostropovitch (cello). Following a name change to the one currently in use for over 60 years, the quartet personnel also changed and despite the Cold War, the musicians were given permission to play abroad. They became fine ambassadors for Russian music-making and championed the quartets of Shostakovitch with whom they worked closely.

The warmth  mixed with the strength of their playing is evident throughout these recordings of the two quartets by Borodin composed between 1877 and 1881, and whilst they often feature in chamber music concerts, it is the second and its famous Andante “Nocturne” that is best known following an arrangement of the movement by Rimsky Korsakov.

The quartets are coupled in an Alto reissue which does more than justice to the playing of the 1964 line-up of Rostislav Dubinsky, Yaroslav Alexandrov, Dmitri Shebalin and Valentin Berlinsky.