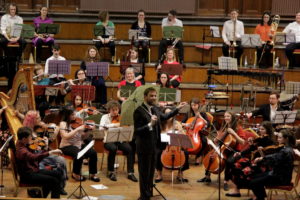 The inaugural performance from the newly established Manchester Light Orchestra took place last Saturday at Victoria Hall in Bolton. A sizeable audience attended the wide selection of music played by an orchestra predominantly of 20 something students. In fact, in discourse with the evening’s conductor Alexander Webb, he was able to inform me that, despite having no nostalgic love for Light Music, the youngsters of the orchestra all found a great affinity for the music. It just goes to show, doesn’t it, that this music remains music for everyone!

Just as much was clear in the playing. Opening with Suppé’s Light Cavalry Overture (The composer’s 200th Anniversary falls in April of this year), the programme was jam packed with not only light music classics from the likes of Farnon (Jumping Bean) and Eric Coates (The Dam Busters March finished off the evening) but also with iconic songs from ‘’mainstream classical” composers, showing just how well our beloved Light Music genre can be programmed in concerts with such broad appeal. We were graced by the presence of Dasha Papysheva, a soprano who appeared twice in the evening, first to sing two operatic excerpts We were also treated to a violin solo from Jody Smith, (Monti’s Czardas) which went down an absolute storm in the first half of the concert.

A running gag featured in the first half in which one of the percussionists repeatedly requested a percussion solo spot. The result was a performance of Leroy Anderson’s Sandpaper Ballet, though a number of other members of the orchestra did insist on adding their own solos as well!

Of course, it would not have been a true light orchestral concert without the presence of our late president Ernest Tomlinson, whose Passipied was beautifully performed in the first half and we were brought to the interval in high spirits with his lively Concert Jig.

I must confess I do hope the Manchester Light Orchestra will continue as a venture, as it is truly a worthy cause in the name of Light Music, but it is much more than this. It is a way to introduce younger audiences to a whole genre of easy-to-approach orchestral music by very able composers who are too often neglected by the musical establishment. Credit has to be given here to the young man who organised the concert as part of his course at the RNCM: Matthew Chadbond, who led the orchestra during the second half of the programme. The project is a credit to him and I hope our readers will join me in wishing him all the success he deserves in his musical endeavours.

As mentioned above, a sizeable audience attended this concert and, while the house was not full, I overheard some feedback at the end of this concert from a member of the audience who commented “let us know when you’re coming back as soon as you can- we’ll pack the place!”

The whole evening was greeted with great applause and cheering and we can hope to see a lot more from conductor Alex Webb, as it is he who will lead the orchestral playthroughs at this year’s Light Music Society AGM. You’ll be in for a treat if you’re planning to come this year!