Gaiety, Glitz and Glamour, or Dispirited Historical Dregs?  A Re-evaluation of Operetta 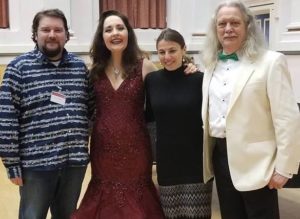 This was the colourful title of a conference, which took place at the University of Leeds in January of this year. Due to other commitments at the time, I found myself unable to attend absolutely all of the events as part of this conference, but it was nonetheless a great opportunity to encounter lively discussion and fascinating insight. Arriving for the second of the sessions on Thursday 10th January, I was party first to a paper on the theme of sexual predation, which, as I’m sure readers will recognise as very common in the plots of operettas. This, however was undercut by the theme that the first speaker (Professor Pierre Degott of the Université de Lorraine ) introduced: that of textual correction in translations and updatings of operetta texts. In numerous iterations and interpretations of operetta texts, which often fall victim to or benefit from re-writes these themes are variously emphasised or played down, often depending on the character of the audiences.

Matthew Head of  King’s College London followed this with a careful analysis of the character of the female composer as a regular character archetype In operetta and musicals of the 1930s. This is true both of stage and screen works, yet there was then, as is still the case, a deficit of female composers in the genres with the notable exception, as Head noted, of the American composer Kay Swift.

Elisabeth Honn Hoegberg (University of Indianapolis) then delivered a paper on Chabrier’s L’Étoille and the birth of the Travesti role. Incidentally, the piece in question has recently been released on a new DVD– review to follow! Then it was the turn of Joh  Rigby, also of King’s College, who spoke on the theme of sexual repression in gender ambiguity in operetta. Much, in fact, has been made of a recent production of Kalman’s The Gay Hussars in which the central word of that title was forefronted, so we are perhaps likely to see more discussion of this as time goes on.

A short break followed before we all embarked upon another session of four papers, this time with a focus largely on French Operette. A highlight for me here I must say was Gregory Straughn (Abilene Christian University) , who focussed on two works by Offenbach with which I was completely unfamiliar: the science fiction works Docteur Ox and Le Voyage dans La Lune. I shan’t enter into much discussion of the French Operette style here, as, to be quite honest it was all rather new to me as someone more familiar with Viennese works.

The evening was something of a treat. If readers cast their minds back a while now, you may remember an interview I carried out with Béatrice Beer, daughter of operetta composer Joseph Beer, whose work was supressed by the Nazis. I say operetta composer, however Joseph Beer only wrote two works in the genre (Polnische Hochzeit and Der Prinz von Shiraz). After Polnische Hochzeit, Beer composed the “Komische Singspiel Oper” Stradella in Venidig, a startlingly tonally complex aria from which (Weit draussen im Sonnenglanz) was performed by Béatrice in her concert. For the evening, we welcomed Béatrice , a professional opera singer, to give her first UK recital, which was entirely of her father’s music. Having carried out our initial interview at a distance of roughly an Atlantic Ocean (Béatrice  resides in Philadelphia), it was a joy not only to hear her singing but to be given a chance to meet and converse in person. For those interested, in fact, I carried out an audio interview with Béatrice , which I can send to members should you wish to hear it. Simply drop me an email and I’ll send it over via a link or CD, whichever you prefer!

Béatrice ’s recital was accompanied and introduced by one of the conference’s key organisers: Derek Scott– professor at the hosting Leeds University.

The final selection of papers I was able to attend was on the theme of Identity and Subject Position: broadly interpreted on representations of particularly national identities in operetta, including Polish (eg. Polenblut, Die Blaue Mazur and  Beer’s Polnische Hochzeit) and Hungarian such as found in many of Kalman and Lehar’s works. It was rounded off by Oxford University’s Bruno Bower, who took the opportunity to analyse briefly the role of Savoy operettas in the creation and representation of a British middle class, whilst tying in the possible uses of musical quotations in the music of Arthur Sullivan. The subject prompted some of the liveliest and, for that matter, fiercest debate of the event.

I confess I was disappointed that work commitments demanded that I had to leave the event at this point, as I was rather hoping to catch the keynote paper by Kevin Clarke, Director of the Operetta Research Center Amsterdam on Operetta as ‘Safe Space’. Another full day of papers followed this in addition, so I can’t help feeling that I unfortunately missed out on rather a lot, but what I can say is that what I saw would certainly spur me on to a return visit, should Derek and friends be moved to repeat this kind of event in the near future. My thanks to the event organisers for making this such a fascinating, if brief for my part, insight!         DA