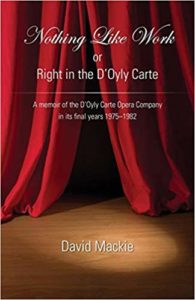 David Mackie has written to us to alert us to the paperback edition of his book Nothing Like Work, or, Right in the D’Oyly Carte. The book chronicles Mackie’s own personal recollections of working for the company. He Joined in 1975, which was the D’Oyly Carte’s centenary year and was, successively repetiteur (’75-’76) and then chorus master and associate conductor from 1976 to when the company closed in 1982.

The book is a chronological account of those last seven years (meant to be the start of the next hundred!), which included a Royal Command Performance at Windsor Castle in the Silver Jubilee Year (1977), a five month tour of the US and Canada (1978), a four month tour of Australia and New Zealand (1979) and the company’s involvement in the making of the film Chariots of Fire (1980). It tells what life was like in a company that was on the road for 48 weeks of the year, having to find digs and doing eight performances a week- more shows in a year than their are days! Only Fairs and Circuses are on the road all the year round now.

Of course, as G&S lovers will know, their work is fading slightly of late and being replaced by other more recent shows, but the present release is available via Amazon and should be available from many good book retailers and should provide fascinating insight to our members who wish to keep this piece of theatre history alive!