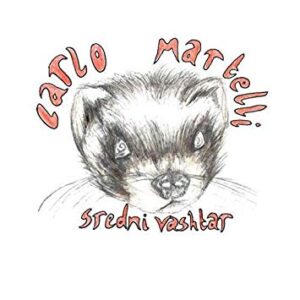 Last year saw this fascinating release from producer Philip Lane of music by Carlo Martelli. Martelli is known perhaps best as a composer of music for various films, including the Hammer production Curse of the Mummy’s Tomb, but his music can be found on a number of other CD releases, notably some exceptional chamber music including the brilliant first and second string quartets. The music on the present release is a feast for the ears of the listener with a lively imagination, conjuring aural images that run the range of emotions from beauty, humour to sadness and (in the first work on the disc especially) horror.

Described as a symphonic drama, Sredni Vashtar is a musical retelling of the famous short story by Saki, whose dark fables have long been celebrated.

There is a thread of dark wit through much of this recording and the bloody fable of Sredni Vashtar is complimented by the subsequent tracks, consisting of excerpts from the opera The Curse of Christopher Columbus. A children’s opera, the piece was commissioned by Shropshire County Council School of Music to mark the 500th anniversary year of the discovery of America. Light and dark collide musically here, as was the case in the symphonic drama, but what results is pleasing to the ear and consistently engaging dramatically. I believe the whole opera is supposed to be released sometime soon, which I look forward to hearing. The musical language in the full orchestral pieces is slightly difficult to pin down. The full orchestra is used with economy creating sonorous textures that feel almost “brittle”. There is a musical spikiness, which complements the drama along with the lyricism and hummable tunes; a potent combination, which works very well. Like the work of Benjamin Britten, Martelli makes subtle use occasionally of polytonality and injects even his most lyrical phrases with piquant harmonies.

Most polyphonic of the offerings here is the Serenade for Strings. If you’re a fan of Martelli’s first string quartet (and you should be!), the Serenade is possibly on familiar territory in terms of the composer’s somehow unmistakable style. Paul Conway’s liner notes put it beautifully: “The overall impression gained is one of concision and pithiness, with no lingering over the more sumptuously scored passages”. It is worth noting that this serenade was the composer’s Op.3, written when only just in his 20s and many have, and I’m sure will continue to comment on the sheer sophistication of this composer’s output.

Ronald Corp, as always, has supreme control over the music and the forces involved. The orchestra itself sounds superb. As I mention, the contrasting textures in the writing are paramount in much of this music, so the finesse of the orchestral players is constantly on show. Note, for example, how the instrumental soloists in the second movement of the Serenade both contrast and compliment the larger ensemble writing (this movement reduces the full string orchestra to only a solo viola, 4 cellos and a bass, only occasionally interrupted by the upper strings in interlude-like sections). Lesley-Jane Rogers is the soprano who takes the role of Conradin in Sredni Vashtar (a role I believe originally for a boy treble). Her voice terrifically embodies this character so much that, and I mean this as the highest compliment, one can believe it is in fact a boy treble singing. She duets in the Columbus excerpts with Olivia Robinson to great effect (I would have like to hear more of them singing together in fact, but perhaps we’ll have a chance when the opera is released). The narrator of Saki’s text is the great Simon Callow. No better narrator could be hoped for- there is an intimacy in this reading that would not be experienced in a concert performance, as Callow is mic’d rather closely (I suspect recorded separately), so while it may not sound as it would in a live performance, it creates an immediacy to the storytelling, which only compliments the highly communicative and directly emotional music further. Let’s hope this represents a growing recording output for Mr. Martelli, which I’m sure will be loved by classical and light music audiences for years to come! DA