ORBI: The Oscillating Revenge of the Background Instruments 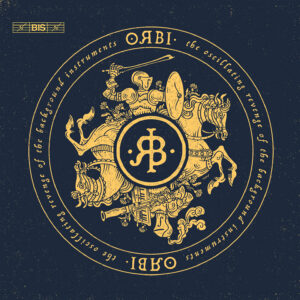 Have you ever wondered how songs by Muse, Led Zeppelin, Pink Floyd and Metallica (among others) would sound performed by classical musicians in a quartet of what are usually considered background and bass instruments? Me neither, but here we are! The present release appears to have been driven by the desire of a group of orchestral players who were more than a little fed up of playing the usual less prominent parts for their instruments found in orchestral writing. An understandable desire and this little piece of insanity is testimony to their supreme abilities as musicians and also to the multifaceted musical styles available to players today.

The real surprise here is the variety in the music as performed- it is full of virtuosity, allowing all instrumentalists to explore the limits of their instruments and, by the sounds of it, have a lot of fun doing it. The most prominent band featured on this release in cover versions is Metallica, who have three tracks covered here. In a way, according to Sambeek’s liner notes, this was an indirect homage to the band and their superb bassist Cliff Burton, who was killed in a traffic accident in 1986. The first on the disc is Fight Fire With Fire, in this arrangement opening with what sounds like almost a baroque pastiche, before giving way to the thundering aggressive bass of the original track- it is a hair raising listening experience, as it should be. Also featured by Metallica are Orion, which particularly shows off the bassoon in this ensemble and Pulling Teeth, which opens with a bassoon solo lasting just under two minutes, before the band crash in to round off this particularly rousing interpretation. The bassoon improvising and extended technique is especially on show in that latter track.

Also featured are covers progressive rock legends Pink Floyd and Led Zeppelin as well as The Doors. I can’t help but feeling the progressive rock listeners out there will enjoy these offerings especially- I was particularly impressed by the arrangement of Floyd’s Hey You. Another stand out track, however, is the 16 minute arrangement of Dream Theater’s Octavarium– a stunning arrangement (reduced from the original 20 minute track) showing the full variety of this group almost entirely in a single number. According to Sambeek, again, there is only one genuine blues/ rock musician in the group and that is Sven Figee on the Hammond Organ, an instrument which adds enormously to the overall sound world of this album. The others are all classically trained orchestral players, seeking to free themselves of the limits often found in that repertoire- in this I’d say they’ve succeeded admirably. A major debt is clearly owed, however, to Marijn van Prooijen, who produced all but two of the arrangements on the cd and if ever there was a CD that was a testament to the talent and importance of arrangers, this is it!

If this all sounds a little bizarre, by the way, rest assured. It is. Speaking as someone who was not a particular fan of most of the bands covered here (save for Floyd and Zeppelin, who I love), I have to say it was particularly fascinating to hear music that I had no particular affinity for arranged and performed so inventively. The idea and result are often exasperating in just how odd they are, but I’d be lying if I said I didn’t find it all very enjoyable! DA