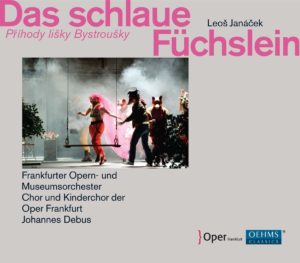 There have been at least 6 recordings of this marvellous opera that I can find with a quick search online, and at least 4 DVD performances (another soon to be released by Opus Arte from Glyndebourne). The present release is from the Frankfurt Opera and, I must confess, I was concerned at first that this might be a recording in German, which might have put me off, as Janáček’s vocal writing is notoriously hard to translate. Thankfully this is a recording in the original Czech, however, and a welcome addition to the catalogue of fine recordings out there.

The opera, as I’m sure many will know, is a relatively short, unsentimental look at the cycle of birth, death and rebirth in the natural world through the story of a young vixen and the hunter who wishes to tame her.

Much has been made critically of Janáček’s musical style, in blending folk melodies and speech rhythms in a form of modernism (a wholly tonal one, I might add). No less a figure than Pierre Boulez referred to the style as a “potent primitivism”, by which he explains that the composer, in using repeating patterns and percussive rhythmic writing achieves something that sounds entirely at home in the 20th century, whilst being firmly rooted in a centuries old folk tradition. Much of this is present in Vixen, of course, but I’d argue that this is Janáček’s most consistently beautiful score.

There are masses of purely orchestral writing in the piece from the preludes to each act to the various interludes and an extended dream scene (sometimes performed as a ballet scene) in the opening act. As you would expect, therefore, it is the Frankfurt Opera and “Museum Orchestra”, who steal the show in this release. The first sung entry is that of the Huntsman, played here by Simon Neal. His is a somewhat lighter baritone than some I have heard in this role and none the worse for it. In fact he is one of the superior singers of the role that I have heard across several different interpretations, combining his initial cruelty with his ultimate realisation of the power of nature in a manner which is wholly human and touching.

This is, evidently, a live recording and it is unfortunate that Neal’s first entry actually sounds very distant, to the point that it is in danger of being drowned by the orchestra. Thankfully this issue only lasts a few seconds and the rest of the opera plays out very nicely balanced. Louise Alder is our Vixen in this release and her light lyrical tone is ideal in making the spiky Janáčekian vocal lines sound wholly natural- a very welcome leading lady for the role. Also noteworthy is Jenny Carstedt as the fox, whose warm tone is the perfect compliment to Alder’s more extrovert vixen. I must also give a very quick shout out to the child singers in the recording who are all brilliantly confident in their singing and in their grasp of the Czech language text- Bravi a tutti!

As mentioned, the balancing issues are really the only thing recording wise I’d flag up as not quite ideal, but rest assured these are minor issues and as an overall interpretation of this work, this fine recording possibly, in orchestral interpretation and in performances, rivals the Mackerras recording from 1981. An authoritative and hugely satisfying recording that I have no hesitation in heartily recommending. DA