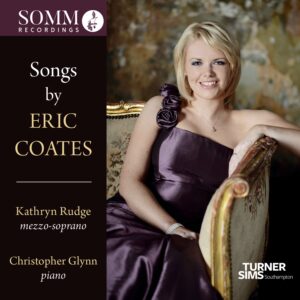 This superb disc is going to challenge a few preconceptions and just maybe confirm a few others.  As Jeremy Dibble (no less) in his booklet notes says “..in the early 1920s Coates’ lighter but beautifully crafted works often appeared in concert next to music that we would now describe as ‘serious’.  As times changed his music in all genres was categorised, especially after 1945, as ‘light music’ suitable for such stations as the BBC’s Light Programme….., though this process of designation was always a disappointment to him, and often a source of protest in that he argued  that no less skill was demanded in writing in the sphere of lighter genres”.

Coates’ idiom in the field of song was not far from that of Sullivan, German, the lighter Elgar, and Quilter, etc, but the arbiters of good taste mysteriously decided that Coates was on the other side of the acceptable.  It could be because some of his chosen texts verge on the sentimental, indeed maudlin, side (even though this was something to do with the post-WW1 hangover) but there is absolutely no doubt as to his craftsmanship and ability to devise appropriate melodic shapes to carry the text.  The lyric lines have a clear sense of inevitability, and frequently, for instance, do not come to a full stop at the end of the verse, but have a sort of codetta repeating the final phrase or phrases.

I first realised that there was something unexpected here when, way back, I noticed a memorable song in the Potter play ‘The Singing Detective’.  This, on investigation, turned out to be a version of ‘Bird Songs at Eventide’, one of Coates’ best-loved creations.  Then I came across ‘I heard you singing’ at a book sale, bought it, and immediately put it into the repertoire of a partnership I have with a soprano soloist.  This is a fine song indeed, and intriguingly the text is by ‘Royden Barrie’, the non-de-plume of Rodney Bennett, the father of Richard Rodney Bennett.

Further investigation reveals that many of these songs require some determination in tracking down as they are out of print, though a few can be located on second-hand sites.  Clearly there is an opportunity, I would suggest, for some enterprising company to assemble a collected edition.  I particularly regret not being able to find, at the moment at least, ‘Always as I close my eyes’ which, soft-hearted though I may be, I find deeply moving.

The performances, by the way, are warmly committed and immaculately presented.