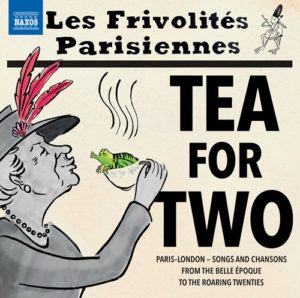 This delightful disc found its way to my desk just after our autumn magazine was released, so I’m a little behind in this review, but please excuse my lateness. Tea For Two seems to have been instigated by the Paris company Les Frivolités Parisienne, a group dedicated to performing operetta and musical comedy in the heart of France’s capital. The focus of this CD, as explained on the very cover, is chanson and song in both French and English covering the time period roughly from the Belle Époque to the Roaring 20s and covers a great deal of light music of the time. In terms of the English Language songs, it is worth noting that these are not simply songs from Britain, but also from America, the title of the disc deriving from the opening number by Vincent Youmans taken from the ever popular 20s musical No, No, Nanette!. Jerome Kern also makes a welcome appearance with the song Some Sort of Somebody from his lesser known musical Very Good Eddie. Along with these numbers, we have the English Light Music gem Roses of Picardy by Haydn Wood.

Also welcome are a trio of pieces from a French light opera composer, who had some success in Britain: André Messager. We have first Ah! Nay do not fly me! from his operetta Mirette, which famously had one of the shortest runs ever known at the Savoy, before being reworked with a new English librettist and becoming far more popular and warmly received upon its revival. We are also presented with two numbers that were not ultimately included in the piece Monsieur Beaucare, and it is a pleasant treat to hear music of such high quality rescued from oblivion thanks to not being included in the finished piece.

Other popular French songwriters are found throughout this recording including Ivan Caryll (of White Horse Inn fame), Felix Fourdrain, Rodolphe Berger and Reynaldo Hahn. The most generous track on this CD is Berger’s Messalinette, fantaisie-sélection, arranged by Berger himself in order to popularise his operetta of the same title on the new technology of the 70rpm record. It is an effervescently jolly piece that brims with optimism of fin-de-siecle European light music theatre. The disc closes with Everybody Rag With Me, by the American Grace LeBoy (wife of famed lyricist Gus Kahn) and it is a superb note to go out on with a superb tune and spirited performances.

Onto the performances: naturally, the most prominent roles are occupied by the two singers on this release: soprano Clémentine Decouture and baritone Philippe Brocard. Both are more than up to the task on a range of styles as amply shown in this release. Decouture is a light soprano with a rapid vibrato, which very much feels reminiscent of the singing styles of the time in which the music was written. Her superb articulation of the swifter passages in the music is matched by her ability to carry long romantic vocal lines in the slower pieces. Brocard is equally adept in a broad range of styles. My one complaint with M. Brocard is his enunciation isn’t always quite as clear as his soprano collaborator and there is a somewhat odd melodic invention on his part in Roses of Picardy. Clearly this is part of his interpretation of the song, but it did raise my eyebrows, as it sounded slightly strange in an otherwise lovely interpretation (for voice and harp, brilliantly played by Chloé Ducray).

The Frivol’ Ensemble are comprised of 14 members of the Orchestre des Frivolités, creating a salon orchestra of formidable ability and I shall look forward to hearing much more from them in the future. The star of the show really has to be orchestrator Matthieu Michard whose arrangements of all of the music make this album a real standout. A treat for Light Music lovers as well as anyone who loves a well written song or two! DA