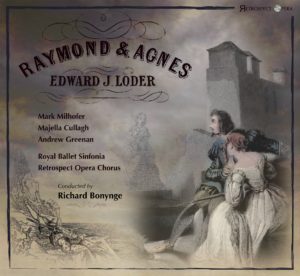 The latest treat issued by Retrospect Opera is an extremely entertaining rarity. Premiered in 1855 in Manchester, Raymond and Agnes proved to be one of the now little-known Edward Loder’s biggest successes alongside his earlier The Night Dancers (1846). The piece was revived in the early 60s to widespread critical acclaim as well as being a success with audiences, but the resurgence in popularity for Raymond and Agnes has yet to appear. Touch wood, however, this release should prove to be an extremely good start.

The plot of Raymond and Agnes is a surfeit of hot blooded gothic romance. Raymond, orphaned at a young age, loves Agnes, who has been locked away in a convent by the dastardly Baron of Lindenberg, who intends to take her as his wife. They conspire to escape the Baron’s clutches, but fate conspires against them and they must overcome a great many obstacles before their union may come to pass. Twists and turns of the plot await around nearly every corner, as do nefarious deeds, double crossing and, of course, ghostly presences.

The music itself is extremely well executed. As conductor Richard Bonynge comments in his introduction, Loder’s melodic inspiration may not equal Balfe’s Bohemian Girl or Wallace’s Lurline, but I would argue that Loder’s grasp of dramatic tension and orchestration is probably superior, certainly to The Bohemian Girl. The similarities soon end, however. Where Balfe and Wallace take their cues from Italian composers such as Donizetti and Bellini, Loder’s inspirations are rather more Germanic and comparisons to Weber’s Der Freischütz (which took English opera goers by storm in 1824) are apt both musically and thematically. Raymond And Agnes opens with an 8 and a half minute, very fine overture, entirely composed of thematic material from the main body of the opera (Freischütz is generally considered the first example of an opera overture that only used themes from the rest of the opera) and the action never dawdles as soon as Act 1 begins. The music is full of very English ballads, despite the Weber influence, demonstrating the composer’s keep synthesis of grand opera and ballad opera styles. Particular highlights in the ballad style include Raymond’s Angels roam abroad tonight aria, Agnes’ O Agnes, Martyr fair in the first act. There are dramatic ballads also, such as Madelina’s expository “Legendary Ballad” which establishes the ghost story, which will be central to the Deus-ex-machina solution to some of the title characters’ tribulations. Also notable is the superbly executed second act soliloquy of the villainous Baron of Lindenberg, which reveals him as a most unconventional character for a gothic romance: a man plagued by conscience for his past misdeeds. The acts do suffer from the finale problem: namely an awful lot of action happening in a very short space of time: in the act 1 finale, the baron springs Agnes from the convent, Raymond votes to release her from his clutches, a band of robbers vows to capture the Baron’s carriage and rob him and Agnes (possibly taking them captive), from which we learn in Act 2 that Raymond has saved them. Similar happens at the end of the second and third acts and each instance will present challenges for any dramaturg who wishes to stage the work, but they are by no means insurmountable and can easily be staged in as exciting a way as the music demands.

Performances are superb. The Royal Ballet Sinfonia under the direction of Bonynge perfectly captures the drama underlying the sung text at all times and navigates the occasional virtuosic passages with great aplomb. Mark Milhofer’s Raymond is remarkable: his are difficult vocal passages that, for the most part, lie extremely high vocally and Milhofer’s lightness of tone and superb enunciation make for a great listen. Majella Cullagh’s Agnes features some similarly fiendish passages including bel-canto writing, which leans toward coloratura in places, although her intonation and enunciation do suffer earlier in the piece, though I would argue that it is almost entirely forgivable, given the placement of some very unkind syllables on very awkward notes from the composer. I loved what Andrew Greenan achieves in revealing the complexities of his character of the Baron through a nuanced vocal performance- this is a singing actor of very high quality. The central plot figures have multiple sidekicks, which could easily become distracting, but Loder carefully characterises each of these figures with the result that they add considerably to the plot. The performances are every bit as carefully characterised by Caroline Dobbin, Alessandro Fisher and Alexander Robin Baker to say nothing of extremely well sung- there is scarcely any let up in the virtuosity for arguably secondary characters, Loder treating them with every bit as much importance as the leads and these singers shine just as much as the titular characters. Also superb is the bandit Antoni played by Quentin Hayes (arguably a more villainous character than the Baron) who achieves the threatening attitude of the character in every bar he sings. The finale actually features a lovely Valerie ex machina moment when one of Retrospect’s co-founders Valerie Langfield (who edited the edition from which the recording is played) has a brief speaking role providing a “big reveal” for the plot when a previously mute character finally speaks up.

Kudos indeed to recording engineer Dave Rowell as well as all others who worked on and edited this superb CD. Thanks also to the compilers of the substantial booklet which contains a full libretto and in-depth liner notes- an essential component to every Retrospect package is the wealth of information available in their booklets- this one is in fact so generous it very nearly doesn’t fit in the CD case! Another all round must-have package from a company to whom the world of English opera is becoming ever more indebted. DA