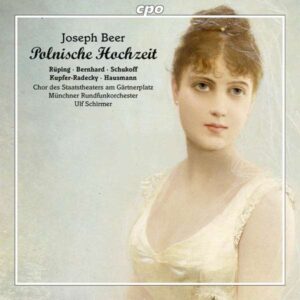 Here is a cd bound to delight light and comic opera lovers. The CPO label has been releasing quite a few operettas in recent years including many titles from composers like Lehar, Leo Fall, Sigmund Romberg, Franz von Suppe and Oscar Straus. This is their latest release and what a cause for celebration it is. Joseph Beer was one of the genre’s rising stars in the period toward the end of the life of Franz Lehar.

He composed Polnische Hochzeit in 1937 when he was only 28 years of age. It was his second operetta, the first having been a huge hit with audiences. Polnische Hochzeit was an instant and massive hit at its premiere in Zurich, both with audiences and critics. Within the next year it was translated into 8 languages and performed on 40 major stages all over Europe. The success, however, was short lived, for with the Nazis coming firmly into power, this piece (with a strong Polish nationalist flavour) was swiftly banned and its composer, who was a Polish (born in Lwów, which is now Ukraine) Jew, was forced to flee to Paris. His mother, father and sisters were all murdered in Auschwitz. Beer continued to compose for his whole life, preferring the more conventional forms of opera (though he personally used the term Singspiel Oper), but he never regained the attention he had before the Nazi years. This, however, was not due to ignorance. Rather, it was thanks to Beer’s choice to compose in seclusion, going so far as to refuse commissions and avoiding the limelight to develop his deeply personal musical language. Even his daughter, the soprano Beatrice Beer, struggled to get any performances of his work. And so Polnische Hochzeit languished in obscurity until a revival in 2012. This recording was made in 2015 and is a live performance before a very enthusiastic audience.

The plot concerns a freedom fighter who returns to Russian occupied Poland in the early 1800s. He has been in exile and is only allowed back into the country under an assumed name given to him by the kindly border control guard. Once back, he seeks out his childhood sweetheart, who, to his horror has become betrothed to the boorish land owner Stachek, who has been married five times before and is the uncle of our protagonist. As usual in such plots, a plan has to be hatched in to prevent the marriage from going through. With the help of the gutsy Susa (a kind of female Figaro character), cogs are set in motion which wins our protagonist his love and utterly humiliates Stachek.

From the very opening prologue, it is clear that we are in for something pretty special here. The lead tenor’s lament for his homeland and lost love is instantly hummable and what follows is tune after tune, ingeniously combining Polish folk music and mazurkas with Viennese waltzes and more than a hint of jazz. It is hard to name stand out tunes, because each number in this piece is immensely singable and memorable. A jazzy highlight, however, comes in the second act in the form of Katzenaugen, which will leave the listener struggling to sit still!

The tenor lead Nikolai Schukoff is a name to follow. He truly shines in this recording and is one of the best leading tenors I have heard in a very long time. Martina Rüping is also perfect as the embattled love interest. There simply is no weak link in the cast. If it weren’t for the applause, one would never guess that this was a live recording. The only complaint is that the CD does not have a libretto enclosed, so it helps to have a smattering of German, but it is not needed to enjoy this work.

This is absolutely essential listening for the lover of high quality operetta. Fair warning, however: you’ll be humming these tunes for days!

My thanks to the composer’s daughter Béatrice Beer for providing me with some personal insight into this piece (an interview can be found in Edition 75 of the Light Music Society Magazine) and also to Joseph’s late wife, Hanna Beer, who worked tirelessly for 25 years after his passing to get his music performed, as have Béatrice and her sister, Philosopher & Artist Dr. Suzanne Beer, whose paintings of her father can be found online at http://josephbeercomposer.com .