The Cradle Will Rock 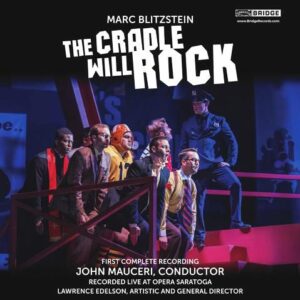 If readers cast their minds back to last year, they may remember a piece in this magazine about composer Marc Blitzstein and the various controversies he faced during his lifetime, which was cut tragically short. The Cradle Will Rock remains his most famous (or infamous) composition. Blitzstein claimed he set out to compose a musical about prostitution, but after a meeting with Bertolt Brecht, was convinced to write a piece about moral and political prostitution as well as the supposed world’s oldest profession. The basic story goes that a young prostitute is arrested for solicitation and thrown into prison with a group of influential people from the town, who turn out to be part of something called The Liberty Committee (ironically named) who are working for the town’s corrupt would be ruler Mr. Mister to quash any potential unionisation in the town’s steel industry. Into this mix walks Larry Foreman, who is something of a pro union agitator and the show’s hero. A mass of shady political shenanigans is uncovered and it falls to the ordinary workers to overthrow the corrupt leaders.

The premiere of the show was mired in controversy, as it had received government funding. Not even the directorship of Orson Welles could save the opening night from being savaged by MacCarthayist objections, that were so extreme that the army was deployed to destroy the set and costumes and forbid the creative team to put the piece on stage. Therefore, the cast and crew (unbeknownst to the composer, who had intended playing the entire score himself on the piano as a result of the disturbances) resolved that if they could not put the show on stage, they would perform it in the theatre’s auditorium in a stunning act of defiance. This went down in the annals of history so quickly that all subsequent performances almost without fail have been accompanied only by a piano and performed in auditoriums rather than on stage.

This recording represents the very first time since the premiere in 1937 that the show has been fully staged with the original fully orchestrated score played in its entirety. As such, it is as major an historical document as it is a fascinating one. As you might expect, Blitzstein’s score is tinged with Brecht/Weillian inflections, using music ironically to underpin serious subject matter. However, as the piece develops, the musical tone becomes darker and far more threatening, despite always maintaining hummable tunes. Is this musical theatre or opera? Such a question may never be resolved (it certainly is a question that followed Sondheim his entire career!).

Now comes the tricky bit. I have been familiar with the show in it’s original staging, with only piano accompaniment ever since I first encountered it: it is a stirring experience and never ceases to amaze with its effectiveness without any sets or costumes. Now, we hear this fully staged and orchestrated version, it is hard to know what to think. Which version feels more authentic? These are the composer’s original orchestrations after all. But this version was not the one that first greeted audiences. Thus, I’m honestly left wondering which version I prefer. Thankfully I don’t have to choose, but it’s a question I don’t see myself being able to answer anytime soon.

The bottom line is that the performances as superb. Mauceri and the orchestra perform the score as brilliantly as you’d expect from artists of their calibre and there is simply no weak link in the cast. This is saying something as well, given much of the cast are members of Opera Saratoga’s Young Artist Program: a group of young artists to watch for sure! If you do listen to this recording, I would still recommend listening to a piano and vocal ensemble version as well and I hope you’ll find the comparison as interesting as I have!