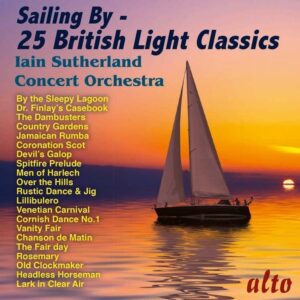 Born in 1936 (a very good year!) Iain Sutherland is, of course, an acclaimed expert in our kind of music, and has been awarded the Gold Badge of Merit by the British Academy of Songwriters, Composers and Authors for Lifetime Achievement and his unique contribution to British Music.

In 1988 Sutherland  formed the City of Glasgow Philharmonic Orchestra, which he continued to conduct until 1997. His recordings are regularly heard on Classic FM.

This compilation contains many of the ‘usual suspects’, as can be seen above.  But there are also some less familiar items to keep long- time collectors like your reviewer interested, such as Lilliburlero and The Lark In The Clear Air, two Peter Hope arrangements of traditional tunes, Rosemary by the underappreciated Frank Bridge, whose most famous pupil was Benjamin Britten, Venetian Carnival by Ronald Binge, Men Of Harlech (Welsh Rhapsody) by Edward German, March Glorious, the theme for the BBC TV series ‘The Great War’ by Wilfred Josephs, and The Fair Day (Irish Symphony) by Sir Herbert Hamilton Harty.  Other composers represented are Trevor Duncan, Charles Williams, Percy Grainger, Sir Edward Elgar, and Malcolm Arnold.

The excellent re-mastering is by Paul Arden-Taylor, and it is always good to have the booklet notes written by the conductor.

There is much to enjoy here and, at around £6,  it would be a perfect introduction to light music for anyone still to discover its appeal.