The Morecambe Promenade Concert Orchestra’s twelth annual New Year’s concert drew the usual capacity audience despite a cold and windy day with snow visible on the mountains across the Bay. These performances take their inspiration from the famous Vienna Philharmonic Orchestra’s New Year concerts, which heavily feature the popular and tuneful music of the Strauss family.  As conductor Howard Rogerson explained, however, he was always seeking to introduce new fare to the Morecambe programmes – in fact this year nine of the sixteen numbers were by other composers.

The enjoyable concert opened with a familiar Strauss overture and contained six waltzes, including the pleasant Ballscenen by Czibulka and the more famous The Village Swallows by Josef Strauss – an apt choice on RSPB bird count weekend. There was also a cheerful march by Schubert, and a fast Galop by Resch. An atmospheric excerpt – Play Gypsy – from Kalman’s Countess Maritza seemed appropriate for Holocaust Remembrance Day, and the programme concluded as usual with the Blue Danube waltz and the Radetzky march. Some of the sheet music used had been acquired from the discarded Blackpool Winter Gardens Orchestra collection and members from the Promenade Concert Orchestra had played there at a recent open day, happily re-uniting music and venue. 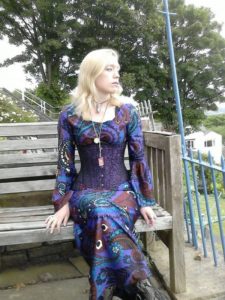 Joining the orchestra on this occasion were soprano soloist Rowena Thornton, and young dancers from Gail Johnstone’s Turning Point Theatre Arts of Lancaster, who are regular participants in these concerts and who, as always, elegantly performed beautifully choreographed dances to three of the orchestral pieces. The soprano was standing in at short notice for the artist originally booked for the concert who was indisposed. Despite not being long familiar with some of the solo music programmed Rowena Thornton gave an extremely assured rendering of a varied set of testing operatic arias by Johann Strauss II, Mozart, Donizetti, Verdi and Gounod. Her strong, fine voice and dramatic flair was much appreciated by the audience, as had been the case on the singer’s previous visit.

The orchestra was led by regular leader, Julian Cann, who demonstrated his usual poise and unflappability, even when having to swap violins temporarily whilst a string was repaired! The players all responded well to the varying demands of the programme with its many different tempi and moods, solo opportunities, and requirements for sensitive accompaniment. Howard Rogerson presided over proceedings in his familiar effective way and commented that the youngest member of the orchestra – Paddy Davies from the percussion section – was fifteen and that it was very important for the future of live music for young people to be given every opportunity to study music at school. This was nowadays sadly not always the case. The conductor was grateful that at least Morecambe’s own orchestra was currently on a stable footing thanks to strong local support – long may this continue!