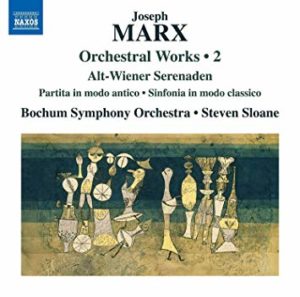 The follow up in Naxos’ re-issues of works by Austrian composer Joseph Marx’s orchestral works was released in February. Orchestral works might be overstating things a touch here, as two of the three works on this disc are expansions of string quartets for string orchestra, but you’ll have no complaints about string orchestra works from me! In regard to the previous release (and indeed almost all of the Marx I have heard) I described the composer’s soundworld as something of a cross between Debussian harmonies and Straussian orchestration. With this release, however, I was frankly stunned that these works are by the same composer, as he has undergone a dramatic musical transformation with these somewhat later works.

Gone is the impressionist tinged massive orchestra and each of the three works here are described as being consciously in an old style. The music is none the worse for it. Marx once jokingly described himself as “sentenced to a lifetime of four part composition” and each of the pieces here are in four distinct movements. First on the disc, we have Old Viennese Serenades. Though scored for a large orchestra, you could be forgiven for thinking, from the opening of the first movement, that this is a chamber orchestra, so sensitive and light is the composer’s touch with the sizeable ensemble. The liner notes highlight the opening movement as striking, with it’s very formal classical style of A-B-A-C-A; a lively and bright opening in D major reminiscent of Mozart and Haydn. It is immediately tuneful and memorable melodically in a way I didn’t find with the Natur-Trilogie. This gives way to the Aria second movement, featuring harpsichord and a vocal-like clarinet solo line. Folk influences are clear (I suspect using known folk song material, though the notes do not specify if it is from known songs of the time). The real highlight for me, however, is the third movement Tempo di menuetto, which opens with a direct quotation from Haydn (the minuet from the Drum Roll symphony), but proceeds to treat the material in a manner that is both classical and romantic in approach with the effect that Marx has created as true a piece of Light Music as any others that we know and love. It is impossible to listen to without smiling and it could and in my view should be a work that graces any light music programme. The serenades conclude with a Scherzo con marcia, which opens with a fugue, but soon relaxes into a more recognisable march. I was surprised when it concluded in a minor key, but shifting tonality is a hallmark of Marx’s style… Most of the time!

Partita in modo antico is the middle work here and directly contradicts what I just said about shifting tonality! Instead, here we have a work that is entirely modal, rather than using traditional tonality, but each of the four movements stays firmly rooted in this style, barely featuring any chromaticism at all. This work demonstrates the composer’s attempt to marry modal writing to the historical church writings of Palestrina and Lassus. It is a curious work with an intriguing opening movement that features many surprising harmonic touches. The second features folk-like figures along with the same church-like features with occasional driving perfect fifth rhythmic figures in the lower strings. This movement is actually a scherzo and trio, though not marked as such. A lively opening gives way to the slower trio and the opening material is then restated with a coda to round it off. The third Adagio molto movement communicates a profound stillness. One could almost imagine the strings transforming into a singing chorus of chanting voices. In terms of material used, there is some link to the first movement here, but the music of this movement is firmly in Phrygian mode as opposed to the Mixolydian of the first. Much of the third movement, in fact, would not be a million miles from Vaughan Williams in his Tallis Variations for example. The final movement, again, features a fugue (this time a double fugue), the main theme of which is derived from the opening movement. It is rounded off with another passage of beautiful calm.

The third and final work on the disc is Sinfonia in modo classico, as mentioned, a string orchestra expansion of a quartet. It is, in many ways a musical tour of the history of the composer’s beloved Vienna. This is, perhaps the most romantically inclined of the three works here, but it is strictly classical in form. Again, it boasts memorable tunes aplenty in its bright and breezy first movement, but the highlight here is the Adagio, which is downright gorgeous, though the hardest to place stylistically. The third movement is another minuet on the Haydn theme found in the first piece, but with a somewhat different treatment. On balance, I’d say I prefer the arrangement in the first work, but this is no less endearing. The fugue form returns for the final movement and the main theme is restated at the close of the work, as was the case in the Partita.

Three hugely enjoyable works in world premiere recordings here. They are played extremely well by the Bochum Symphony, though it has to be said of a recording with such prominent writing for strings that it is this section that really steals the show. The soloists (who are not named) in the first piece are truly admirable for their sensitive playing, but it is the pianissimo playing of the strings in the adagios of the second and third works that really has the “wow” factor. So gentle is the playing that the listener almost daren’t breathe! So if you’re a light music fan, who might have been less inclined to listen to the first volume of Marx orchestral works on account of the romantic overwrought-ness, I really recommend you give this one a go. It was a wonderful surprise of highly original (despite using antiquated forms) music that is a joy to hear from start to finish. These could be seen even as extraordinarily rebellious compositions using such idioms in pieces all dating from the late 1930s and early 40s!