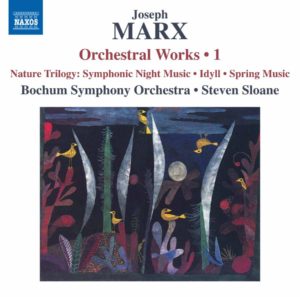 The present release is the first time that Marx’s epic Natur Trilogie has been released uncut on record: the first seemingly of a series of releases of Marx’s orchestral works. If this release is anything to go by, this will really be a series to treasure as it progresses. It is hard to classify Marx’s musical language, but if you can imagine a deliciously opulent musical cross between the harmonies of Debussy and the orchestral flair of Richard Strauss, you’d be within the right area. For those of you who enjoy late romantic music, fans of Schreker will find much in common with the work of Marx- a very visually evocative sound world is at the forefront, predicting the advances in cinema music (the opening to Marx’s Ein Herbstsymphonie is almost a direct quote from Schreker’s opera Die Gezeichneten).

It is a real shame that the music of Joseph Marx has never really found much of an audience in the concert hall. Multiple reasons for this, of course, but chief among which were the growing tide of modernism in his lifetime, the disruption brought about by World War 2 and accusations of Nazi collaboration aimed at the composer. While many have suggested that his relationship with the fascist regime was somewhat equivocal, more recent research seems to indicate something far more complex, which I won’t expand on too much here. Suffice it to say, Marx seems to have seen the Nazis as a rum lot who he just had to deal with if he didn’t want to be forced to leave his beloved homeland (though he seemingly relished any opportunity to make them look as stupid as he could!).

The Natur Trilogie is cast in three very substantial movements. From what I can gather, it was very rare that all three were performed together, but they have been successfully programmed individually before now. The love of nature is a common thread through almost all of Marx’s music and various aspects shine through in the music here. A very sizeable orchestra is deployed, but sensitively used. In the first movement there is quite extensive use of solo instruments- in particular duetting strings and woodwinds. Although it bears the title Symphonische Nachtmusik, this is no calm nocturne- the still of night is constantly being interrupted by wildlife calls and the darkness is dispelled by glorious majestic evocations of the Austrian countryside lit by moonlight.

The central movement is the shortest on the disc (though not very short at 15 minutes) and by far the calmest episode of the three. Idylle could just as easily be a nocturne as it could depict a sun drenched day walking in the Austrian mountains where Marx had a holiday home. I find this movement has some of the most memorable melodic writing found in the trilogy and is by far the most hummable. That is not to sell the other movements short, but I do find that what I come away from the outer two movements with most is a sense of wonderful atmosphere to lose oneself in rather than with particular motifs I gravitate towards.

The final movement has been particularly popular in concert programmes and it is easy to see why. There is huge variety here, but it is overall more upbeat in tone and rounds of the cycle with a very effective, if a little overwrought climax.

The performance by the Bochum Symphony is wonderful- especially in their lush string section. Occasionally I found the upper brass a touch too strident, or at least not blending with the overall atmosphere occasionally, but this may well have been deliberately indicated by the composer. Hear this above all for lesser known late romantic atmospheric writing in a sumptuous helping that I recommend listening to multiple times. It really is a richly orchestrated “bliss-out”!