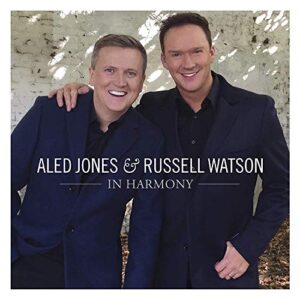 How Great Thou Art, Where Have All The Flowers Gone / Here’s To The Heroes, Cinema Paradiso, You Raise Me Up, Mattinata, Volare, Silent Night, and seven other tracks

Not to forget the famous Three Tenors, but this is a home-bred Baritone and Tenor: the well-known Classic FM and BBC presenter / former boy soprano, and the award-winning singer known as “The Voice”, who have been friends for some time but have only just got together vocally for this album.

Here’s To The Heroes celebrates the centenary of the end of World War 1 and the 70th anniversary of the NHS.  Another interesting piece is Where Should This Music Be? with words by William Shakespeare sung to Edward Elgar’s ‘Nimrod’.  There is also the Bach/Gounod Ave Maria, and Bright Horizons was especially written for the soloists by Sir Karl Jenkins, the most performed composer of his generation.

Fascinating to read inside the digipak that the orchestral accompaniment by The New Zealand Sinfonietta – conductor Tom Rainey – was recorded in their own country, the soloists in London and Wilmslow, and the nine-member choir in another London studio.

With its engaging selection of songs, arias and hymns, this is an enjoyable album to listen to and achieved the No.2 spot in Classic FM’s annual chart of the bestselling albums for 2018.  It seems it was also a pleasure to perform, as Aled thinks Russell “sounds brilliant”, and Russell thanks Aled for “being the best singing partner ever.” Their voices certainly blend well and the album is appropriately named.

Whilst  this release manages seven minutes more than a similar release by Bryn Terfel quality is still not matched by quantity.

And if we are to believe that nowadays nobody under 40 years-of-age buys CDs, BMG should reconsider the small size and coloured background of its liner notes if those for this disc is the norm.